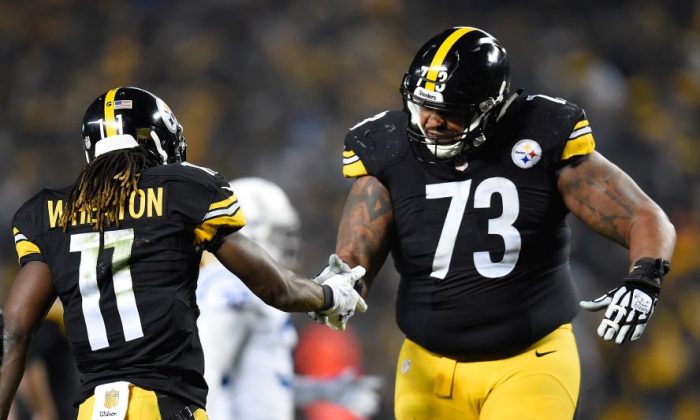 Steelers Player: ‘We Didn’t Ask for This’

One Pittsburgh Steelers player said that he’s ready to move on from the controversy over the national anthem, saying the team “didn’t ask for this.”

Steelers guard Ramon Foster offered his thoughts this week on the team deciding to stay in the stadium tunnel when the national anthem played on Sunday, Sept. 24.

“I was kind of pissed at how people reacted to it,” said Foster, according to CBS Pittsburgh. “In a sense, that we didn’t ask for that. We were thrown into this by some comments outside of the business and the sport of football. To see the backlash that I’m getting from back home, from people in my hometown on something I had no idea was going to go over like this or to have to warn my kids about certain stuff that hey, if somebody says something at school you have to let me and your mom know. We didn’t ask for that, we didn’t ask for this whole situation.”

Foster said he and the Steelers just want to focus on the game—not politics.

“For the fans that criticize us, bring it back to football. Take your political views somewhere else,” said Foster. “If you choose not to watch it, we hate to lose you but we want to play football right now. We’ll deal with everything else when we can.”

Steelers player Alejandro Villanueva was the only player to appear outside the tunnel for the national anthem before the game.

Villanueva said Monday that he regretted the decision.

“I see that picture of me standing by myself and I’m embarrassed to a degree, because unintentionally I left my teammates behind,” Villanueva added. “It wasn’t me stepping forward. I never planned to boycott. … At the end of the day, whether I want it or not, whether it was my intended plan or not, the reason I went out there by myself is the reason it’s causing all this distress.”

Foster confirmed that the team was trying to be “unified.”

“A lot of guys had a lot of opinions on what we should do, the idea was that we would, as an organization, stay in so that we could protect everybody,” said Foster. “The backlash, inadvertently, has still been bad but you can only imagine if guys had stepped out and did their own thing and that was what we were trying to avoid. It just didn’t come out that way.”

The controversy comes after President Donald Trump issued a series of tweets and comments about players not standing during the anthem.

“Ratings for nfl football are way down except before game starts, when people tune in to see whether or not our country will be disrespected!” he tweeted on Sept. 26.

“Tremendous backlash against the NFL and its players for disrespect of our Country. #StandForOurAnthem,” he said a day earlier.

At least 200 players across the league kneeled in protest during the anthem after the president’s comments in Alabama slamming the NFL for allowing players to do so.