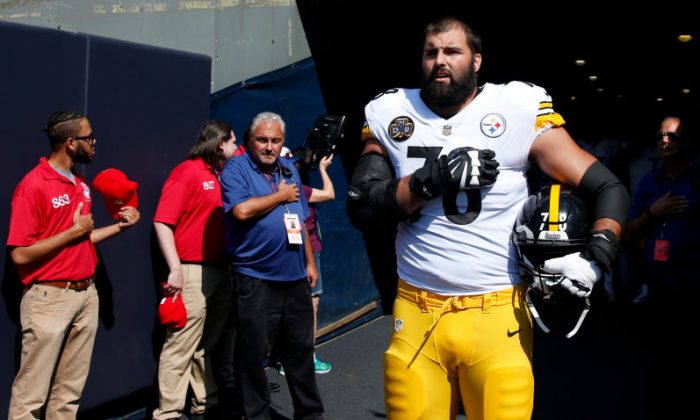 Alejandro Villanueva #78 of the Pittsburgh Steelers stands by himself in the tunnel for the national anthem prior to the game against the Chicago Bears on September 24, 2017 in Chicago, Illinois. (Joe Robbins/Getty Images)
US News

Pittsburgh Steelers offensive tackle Alejandro Villanueva had the top-selling NFL jersey in the past 24 hours after he stood for the U.S. national anthem, ESPN reported.

“More Villanueva gear, including jerseys and name and number T-shirts, has been ordered than that of any other NFL player,” ESPN reported on Monday.

Villanueva was the lone Steelers player to come outside the tunnel to stand for the national anthem before the game against the Chicago Bears on Sunday. The team decided to stay inside during the anthem to avoid the controversy. In TV footage, some Steelers players could be seen standing in the tunnel some distance behind Villanueva.

Villanueva became a viral sensation after photos of him decked out in his Steelers gear, his hand over his heart.

He’s a former Army Ranger who earned a Bronze Star and served three tours in Afghanistan.

Alejandro Villanueva, a former Army Ranger and Afghan war vet, would still come out to show respect for the flag, his teamates cower behind pic.twitter.com/ZHak6IkzJY

Steelers coach Mike Tomlin said that he wanted the whole team to stay inside. “I was looking for 100 percent participation. We were gonna be respectful of our football team,” Tomlin said, per ESPN.

The anthem protests were started last season when former 49ers quarterback Colin Kaepernick knelt during preseason games, drawing intense media scrutiny. Kaepernick and others say they’re protesting against police brutality and racism in the United States. But many critics have said that the protest shows disrespect to the national anthem and the United States itself.

But Tomlin told reporters that he wanted his team to focus on the game against the Chicago Bears, which they lost, rather than focusing on President Donald Trump’s comments on the anthem protests.

“Many of them felt like something needed to be done. I asked those guys to discuss it and whatever they discussed that we have 100 percent participation or we do nothing,” Tomlin said, Fox reported, after the game. “They discussed it for an appropriate length of time and they couldn’t come to an understanding, so they chose to remove themselves from it.”

A teammate of Villanueva said the team supports him. “We support our guy Al,” Cam Heyward, a teammate, said. “He feels he had to do it. This guy served our country, and we thank him for it,” Heyward added to ESPN.

According to Fox Sports, some 200 players protested during the national anthem. Some knelt, some sat, and some raised their fists in the air, which can variously be interpreted as a black power salute, an expression of solidarity and strength, or simply a gesture of defiance.

Other than the Steelers, the Tennessee Titans and Seattle Seahawks players didn’t go to the field’s sideline during the anthem.