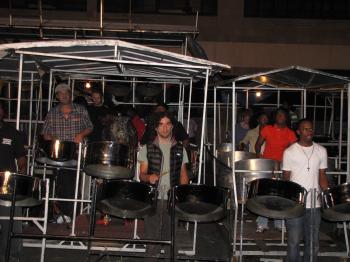 Tenor,Alto, and Mezzosoprano (Dennise Benson)
US

Denise Benson
View profile
Follow
biggersmaller
Print
BROOKLYN, New York—Labor Day is a very important holiday for Caribbean people. It is especially so in Brooklyn. People come from around the world to watch and be a part of the West Indian Day Parade, that was held on Monday. The entire Labor Day weekend is packed with events. One big event was the Pan Steel Drums Competition.

A pan yard is a place where pannists, or steel drummers, get together to practice. Pan Sonatas was one of 10 steel bands that took part in this year's annual competition held at the Brooklyn Museum.

If you are near a pan yard you can hear the chromatic sounds of the drums blocks away. Especially near Labor Day, the steel bands of New York rehearse intensely so they can face off at the annual Steel Band Panorama competition and vie for cash prizes.

The Pan Sonatas is considered one of the more elite as well as one of the oldest steel bands in New York. The Sonatas maintain 25 players year round, and use about 100 people for the Steel Band Panorama competition. Of that number, 60 per cent are regular returnees. The players come from different parts of the United States and the Caribbean Islands. The Pan Sonatas’ were the winners of the 2009 Panorama Steel Band Competition.

Sherwin Edwards, captain of the band discussed how their school age pannists benefit from being in the band. “Our main objective is to educate and rehabilitate all young people through the music of the steel band. We try to occupy their time as much as possible,” said Edwards.

The steel drum has its homeland in Trinidad. African hand drums and bamboo tamboo were the rhythmic instruments used to call gang members to join in a fight. The British government banned both instruments for that reason. The first steel drum came into existence in the the 1930s somewhat by accident. The renowned Winston Spree Simon was the first to make a "pan.” Upon finding a dent in his garbage can he used a hammer to pound out the dents. While pounding, Winston realized that different sizes and shapes of various dents in the can created different sounds. Amazingly, each bang of the hammer gave rise to a unique and distinctive sound.

Empty 55 gallon oil drums, along with biscuit tins and hubcaps became the materials for the new drums. Trinidadian culture holds that music can be made with whatever is at hand. The United States armed forces had left many oil drums behind in Trinidad, and these proved to be ideal materials for creating pans. In addition, Trinidad produces oil, which means that the supply of oil drums is constant.

Initially the music that came from the pan was considered the music of the less fortunate. The government in the early years was afraid of the steel pan, but now the steel pan has become a legendary internationally recognized instrument and is now socially acceptable. Accordingly, Trinidadian's believe the steel drum is the solitary non-electronic musical instrument invented in the last century. Who would have ever thought that the pan would make such musical history?

In Brooklyn, the West Indian Day Parade represents the unofficial end to summer, and the beginning of the school year.