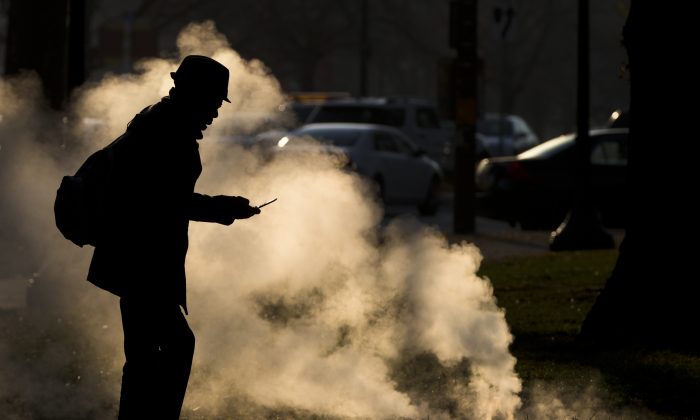 FILE - In this Nov. 30, 2012 file photo, a pedestrian looks at his phone near steam vented from a grate near the Philadelphia Museum of Art on a cold morning in Philadelphia. A study released Thursday, July 3, 2014 by the journal Science, which involved college students who left their cellphones and other distractions behind to be alone to think for six to 15 minutes, found that many of them reported it wasn’t very fun. (AP Photo/Matt Rourke, File)
Gaming

The Steam Summer Sale 2014, which ended a few days ago after lasting more than a week, had more than 8 million concurrent users at the end of the sale, Steam said.

According to a report from Forbes, Steam said it broke the record for users online at one time.

The concurrent user mark passed 8 million on day eight for the first time in the service’s history. The previous record was hit during Christmas 2013 with 7.5 million, and before that, it was 7 million in December 2013.

Valve said more than 75 million active accounts are on Steam.

“Steam’s growth is impressive, if not expected for anyone familiar with the industry. Steam has far and away become the gold standard for game distribution, a balance of pleasing both players and game makers. Similar services like EA’s Origin and Ubisoft’s Uplay have struggled to win the hearts of players given their often unfriendly interfaces and issues with overly restrictive DRM. And above all else, any game that players can purchase on Origin or Uplay, they usually wish they could just buy on Steam instead,” writes Forbes’ Paul Tassi.

There’s still deals to catch, however.

Steam is offering a Weekend Deal for Crysis 2 and a Summer Event sale for Killing Floor as well as a Weekend Dead for Brofore, which can all be accessed here.

“The End of the Line update for Killing Floor’s, plus the Killing Floor Summer Event is now live! Save 75% off to celebrate now through July 16th, 2014,” reads an update.

And on Wednesday evening, Steam updated its Client.

A few fixes–including the “downloading games in development” bug–were implemented.