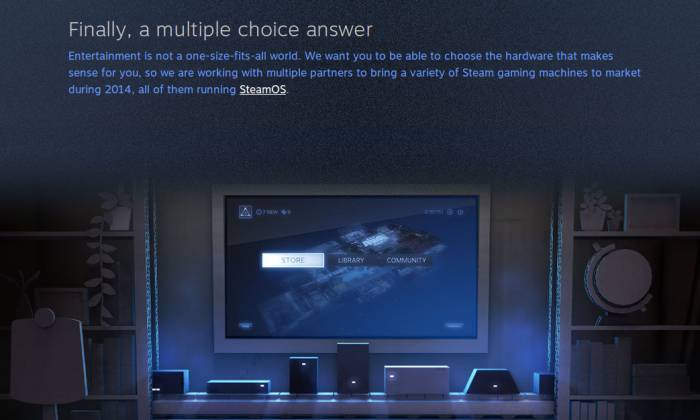 Valve’s Steam Box, or Steam Machines, are highly anticipated by gamers. So what’s the latest on the release date, price, specs, hardware, controller, and pre-order?

Valve hasn’t pinpointed an official release date. It sent out 300 prototypes near the end of the year free of charge for testing.

Valve says “beginning in 2014” there will be multiple SteamOS machines, made by different manufacturers, available for purchase.

“We’re conducting a beta of the overall Steam living-room experience, so we needed to build prototype hardware on which to run tests,” the company said in a blog post. “At Valve we always rely on real-world testing as part of our design process. The specific machine we’re testing is designed for users who want the most control possible over their hardware. Other boxes will optimize for size, price, quietness, or other factors.”

Still, people will be able to build their own box to run SteamOS, and they can hack the ones of Valve’s machines.

The nearly 3,000 games available on Steam will be available, with some already compatible with SteamOS and others to be made compatible.

“The rest will work seamlessly via in-home streaming,” Valve said.

Along with a prototype, Design News listed specs for the new machines:

No prices have been listed, though some gaming websites are predicting a price of around or even over $500.

The controller is shown in a picture released by Valve.

Varies from console to console

Steam box connects to a television, and is “designed to bridge the gap between PC and console gaming,” reported CNet.