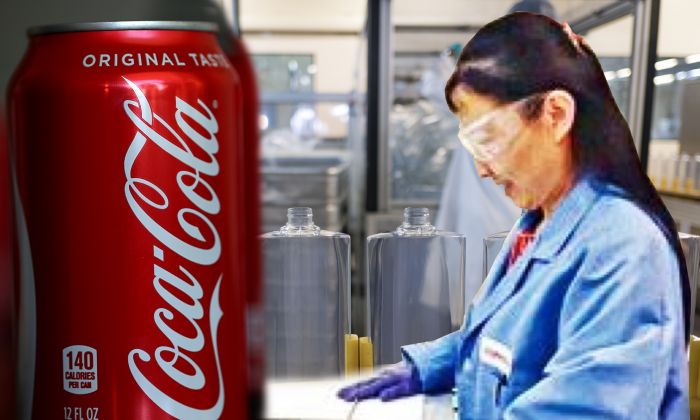 You Xiaorong, a former principal engineer with Coca-Cola, has been found guilty of stealing trade secrets worth $119.6 million. (Getty Images/Weibo/Composed by The Epoch Times)
Crime and Incidents

A federal judge has sentenced a China-born American chemist to 14 years in prison for stealing trade secrets, engaging in economic espionage, and committing fraud.

You Xiaorong, also known as Shannon You, of Lansing, Michigan, was sentenced by U.S. District Court Judge J. Ronnie Greer in Greeneville, Tennessee on May 9, according to the Department of Justice (DOJ).

Besides the jail term, the department said the 60-year-old former Coca-Cola employee was ordered to serve three years of supervised release and pay a $200,000 fine.

“The defendant stole valuable trade secrets and intended to use them to benefit not only a foreign company but also the government of China,” said Assistant Attorney General Matthew G. Olsen of the Justice Department’s National Security Division.

“Today’s sentence reflects the seriousness of this offense, as well as the Department of Justice’s commitment to protect our nation’s security by investigating and prosecuting those who steal U.S. companies’ intellectual property.”

According to court documents and evidence presented at trial, You had worked at two U.S. companies—Coca-Cola in Atlanta, Georgia as a principal engineer, and Eastman Chemical Company in Kingsport, Tennessee as a packaging application development manager. During this time she acquired access to valuable trade secrets related to formulations for bisphenol-A-free (BPA-free) coatings for the inside of beverage cans.

You stole the trade secrets in a bid to set up a new BPA-free coating company in China, said the DOJ.

Until recently, BPA was used to coat the inside of polycarbonate beverage cans and other containers to help minimize flavor loss and prevent the container from corrosion and reactions with what’s inside. However, due to BPA’s potential health risks, companies have been searching for and developing BPA-free alternatives—a costly and time-consuming process.

“When companies invest huge amounts of time and money to develop world-class technologies, only to have those technologies stolen, the results are devastating,” said Assistant Attorney General Kenneth A. Polite Jr. of the Justice Department’s Criminal Division.

Bradley S. Benavides, acting assistant director of the FBI’s Counterintelligence Division, added that this is not just a crime against the victim company.

“It’s a crime against American workers whose jobs and livelihoods are impacted,” he said.

You and her Chinese corporate partner, Weihai Jinhong Group, received millions of dollars in Chinese government grants to support the new company, including a “Thousand Talents Plan” award, prosecutors said.

You’s application and other evidence presented at trial showed that she intended to benefit not only the Weihai Jinhong Group, but also the central communist regime of China, provincial Shandong authorities, and municipal authorities of Weihai.

According to a 2018 Chinese media report, by joining the program, she was to be rewarded 3 million yuan ($443,000) in total from the Chinese authorities for bringing her stolen BPA-free technology to China.

You applied to the Chinese-state-sponsored recruitment program, known as Thousand Talents Program, in 2018.

This program, and other similar Chinese plans that target overseas talent, have drawn intense scrutiny from Washington over their role in facilitating the transfer of intellectual property to China and its perceived threats to national security.

Leaked Chinese documents obtained by The Epoch Times in 2020 showed a dozen researchers and experts who received nominations to the program hold doctorate degrees from Western universities or have previously worked in Western companies and academic institutions. The experts, from the United States, the U.K., Australia, Denmark, Germany, and Japan, specialized in high-technology industries such as artificial intelligence, biomedical, pharmaceutical, and biochemistry.

From 2008 to 2017, more than 7,000 “high-end professionals”—mostly from overseas—have participated in Thousand Talents alone, including six Nobel Prize laureates, according to Chinese state media reports.

Last week, a 52-year-old Swiss-based Chinese scientist was convicted for his role in a $10 billion scheme to steal cancer medications from his employer and rebrand them under his own biomedical company, according to the DOJ.