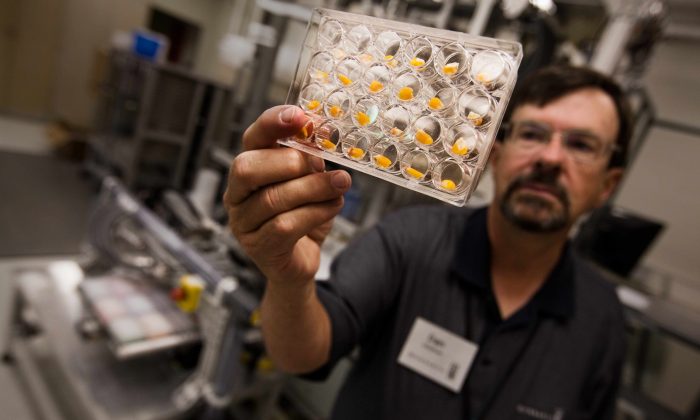 Stealing Corn Seeds for the Motherland

Thefts from Midwestern U.S. cornfields may be part and parcel of China’s acquisition strategy in agriculture
By Joshua Philipp

A manager for DuPont saw a Chinese man on one knee, digging up one of the company’s research fields in Iowa, while a second Chinese man stood nearby. When he confronted the two, one of them, Mo Hailong, said he was attending a nearby conference. Then the manager’s phone rang, and when he stopped to take the call, the two men made a sloppy escape. They hopped in their car and drove off through a ditch.

Mo was eventually arrested by the FBI, and was indicted in December 2013, along with five alleged accomplices. The incident has raised a few eyebrows—it’s not every day that industrial espionage keys in on corn seeds.

On the surface, it’s a strange crime. Yet as you delve deeper, it becomes a case of espionage and government interest, of a massive industry starved and green-eyed over foreign competition, and of a plot tied to power and manipulation.

As with Watergate, these weren’t just a few average men prying where they shouldn’t have, and their titles are telling of the forces behind them.

Mo is the director of International Business of the Beijing Dabei Nong Technology Group Company (DBN Group). Wang Lei, the man who was with Mo when they were caught digging up seeds, is the vice chairman of Beijing Kings Nower Seed S&T Co. Ltd. All but one of the other men—whose job and position has not been unveiled—have similar connections.

DBN describes itself as a state-level, high-tech enterprise, with a business philosophy of “patriotic agriculture” and striving to be in the lead. The company is one of China’s leading agricultural science and technology companies.

Both the state affiliation and the patriotic duty are telling.

A group of close to 6,000 delegates gathered at a conference and chose 27 sectors of research and 108 key research projects. Among the eight large projects, which included computers and space science, was agriculture.

Deng later put forth Project 863, also called the State High-Tech Development Plan. It was part of the policy for “catching up fast and surpassing” Western powers, and is often blamed for China’s ongoing widespread theft of intellectual property from the West.

Biotechnology is among the industries identified in Project 863, which would include the type of seed technology the men allegedly tried stealing.

The case of the six men trying to steal seeds was also not isolated.

On Aug. 7, 2013, U.S. Customs and Border Protection caught a Chinese delegation trying to smuggle stolen seeds tucked away in their luggage. They were caught as they were trying to board a plane back to China.

The smuggling attempt was traced back to two Chinese-born men working in the United States, Zhang Weiqiang and Yan Wengui, both of whom were arrested. Zhang was an agricultural seed breeder and Yan worked for the U.S. Department of Agriculture as a rice geneticist.

China has a clear desire for the seed technology. As a whole, China is facing an agricultural crisis—both for its human food supply and for feed needed for its meat industry. Facing this, China rescinded its policy of grain self-sufficiency in February this year; the attempted thefts took place during what was likely China’s last attempt to avoid what it would regard as an unfavorable shift of policy.

In a rare act of transparency, the Chinese Ministry of Land and Resources released statistics in June 2012 showing that China was rapidly losing farmland, and its food supply could soon feel the effects.

Of particular concern was that China’s most fertile region, the 87-million acre Northeastern Chernozem Region in the northeast, was one of the areas most seriously impacted. The region grows more than 30 percent of China’s grains, including most of its rice and corn.

This presented an acute dilemma to Chinese authorities. While it is losing clean water and arable land, there is growing demand for meat in China.

An interesting timeline emerges if one notes the dates of China’s studies on loss of farmland and the dates of the alleged thefts.

Mo and Wang and their four accomplices allegedly tried stealing the corn seeds between September 2011 and October 2012 from fields in Iowa and Illinois—around the time the Chinese Ministry of Land and Resources would have begun its study for its report on China’s diminishing farmland.

The timeline extends further. The men are said to have stolen the seeds between September 2011 and October 2012, yet were not arrested until more than a year later, in December 2013.

In the interim, they allegedly had their own plot of land in the United States where they were growing and experimenting with the inbred seeds. This means they had more than a year to grow and cross-pollinate the seeds.

Inbred seeds are self-pollinating and need to be crossed with other inbred seeds to create the hybrid seeds, which are then sold to farmers.

The bulk of the research goes into creating the inbred seeds. The process is both long and costly. According to the FBI press release, it takes between five and eight years to develop the inbred seeds, with research and development at a minimum of $30 million to $40 million.

Creating a hybrid seed, however, is just a matter of cross-pollinating two types of inbred seeds—and the men would have likely had more than enough to choose from. They allegedly stole different seeds from the leading companies in seed technology, including DuPont Pioneer, Monsanto, and LG Seeds.

DBN Group also had its eyes on technology for seeds mirroring those that were allegedly stolen.

In June 2013, the DBN Group announced a partnership with Bioceres Argentina to begin producing and experimenting with seeds resistant to drought and salinity. The technology would allegedly combine research from both China and Argentina using soybean and corn genes.

The announcement was made around the same time that several of the companies the men allegedly stole from announced new corn seeds also resistant to salinity and drought.

China hasn’t released a major hybrid corn seed since 2001, according to The New York Times, except one type done in collaboration between Pioneer and a Chinese company in 2007.

China has a clear interest in hybrid seeds, as they are designed to be resistant to drought and pests. In particular, they are resistant to soil salinity—which is what China is facing with increased salt in its soil due to the desertification of its farmland.

It is not recorded whether Deng Xiaoping approved of the apparent current strategy for “catching up fast and surpassing” the West in seed technology.