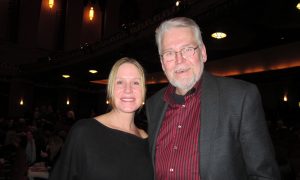 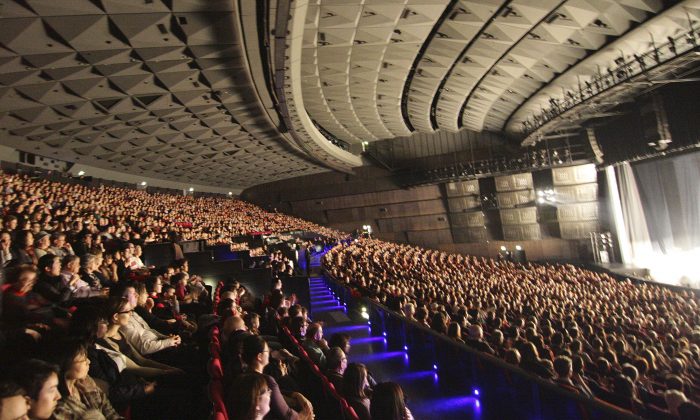 The audience is pictured at a Shen Yun performance at the Palais de Congrès de Paris on April 13, 2013. The ability of Shen Yun Performing Arts to attract mainstream audiences in countries around the world with its performances of classical Chinese dance has caught the attention of propagandists in Beijing, who want to imitate it. (Epoch Times)
China

After attempting to sabotage its performances for eight years, the Chinese Communist Party has recently decided to take a different tack to dampening the influence of the independent classical Chinese dance company, Shen Yun Performing Arts: plagiarism.

Communist Party cultural and propaganda officials are funding teams of dance and art experts to travel abroad and carefully watch, and keep meticulous notes on, Shen Yun’s performances, according to individuals in Beijing familiar with the discussions.

Propaganda officials reportedly reason that, even if they cannot beat Shen Yun, they will at least be able to interfere with its market by creating similar performances.

Over 20 experts have been selected and sent to Shen Yun’s performances around the world, the sources said.

Shen Yun Performing Arts is headquartered in New York. It was established in 2006 by Chinese trained in Chinese classical dance and music, and its international tours since then have made it the premier performance of its kind.

Each year’s tour typically covers around 100 cities, for several hundred performances. According to audience interviews conducted by The Epoch Times, the show receives consistently high praise from audience members.

The move to copy Shen Yun’s performances is said to have been in part motivated by remarks made recently by Party-affiliated cultural officials in Beijing.

In March at the annual meeting of the Chinese People’s Political Consultative Conference, Xu Peidong, a state-affiliated composer, lyricist, and singer, and the recipient of a number of officially-sponsored awards, said that he was “alarmed” by Shen Yun’s success overseas, according to the South China Morning Post.

This rang alarm bells in the propaganda and cultural bureaucracies of the Communist Party, part of whose job it is to expand the influence of the regime by harnessing the trappings of Chinese culture.

Prior to Xu Peidong’s remarks in Beijing, an expert in the Chinese Academy of Social Sciences, a state-run think tank, and some well-known names in the Beijing arts community, had jointly written a report proposing a way to “deal with” Shen Yun, sources said.

The report noted that Shen Yun’s performances had created a sensation worldwide. It suggested that the Chinese regime’s official arts organizations could recapture the international market in the traditional Chinese culture developed by Shen Yun.

The Central Propaganda Department took this report seriously, according to sources, and this led to funding the effort to plagiarize from Shen Yun. None of the sources consulted for the article would comment on the record, due to the politically sensitive nature of the topic.

Shen Yun’s response so far has been to add a notice to its Chinese-language website reminding viewers that “The techniques, contents, design, and creation of Shen Yun performances are protected by patents and copyrights…. Violators will be prosecuted.” A version of the statement is now also appearing in program books at Shen Yun performances.

In March Xu Peidong discussed frankly problems faced by the Chinese regime’s official dance troupes. He said that the Party’s own overseas cultural activities are in a state of disarray: the troupes operate without a unified structure, and generally give mediocre performances, he indicated. “It’s rather chaotic,” he said in remarks paraphrased by Ming Pao.

According to Shi Zangshan, an independent commentator on the Chinese Communist Party, the fact that an independent performing arts company is having great success presenting traditional Chinese culture makes the Party uneasy.

“The CCP tried to destroy China’s 5,000-year-old civilization, and to imbue Marxism-Leninsm into the minds of the public. But now even the high-level officials don’t believe that ideology,” Shi said.

The difficulty of simply copying Shen Yun, however, became apparent to some of the experts that were dispatched to Taiwan, Japan, South Korea, and Europe, to study the performances’ dance technique, clothing, animated backdrop, use of color, and orchestra, according to sources.

One expert who was sent to Japan told a friend that Shen Yun is “hard to learn.” This was due not to the dance techniques in and of themselves, but the fact that most performing arts troupes in mainland China today are “mixed,” she said.

The official troupes typically combine Chinese, Western, and modern dance techniques. The dancers thus lack the pure, traditional artistic expression found in a Shen Yun show. “Maybe Beijing Dance Academy may give it a try,” she was reported to have said, “but the choreography really takes time to get there.”

A dance expert from a military dance college said that several experts in the field in Beijing have discussed the matter, but generally feel “not confident.” He remarked that the surface elements of the performance, such as the backdrop, clothing, and to some extent the music, are able to be copied without too much difficulty, but that the dance itself will be much more difficult.

Dancers in mainland China are very westernized now, he said, and their body postures and styles of expression will be impossible to change in a short period of time. Without major sponsorship from Western organizations, he said, it will be difficult to seize Shen Yun’s market.

Others in the mainland China cultural community are happy to humor the authorities with their plan, as long as the regime is handing out money for them to travel overseas and perform.

“As long as the central government would like to support their activities, who cares about the result?” the friend to a well-known star said, according to a source. “As long as Chinese media report it and announce that it was successful, that will be good enough.”