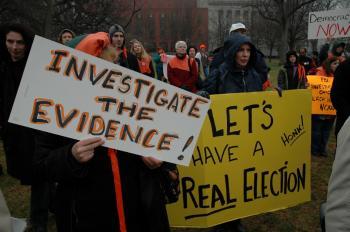 A scene from “Stealing America: Vote by Vote,” which explores the controversial topic of tampering and foul play on election day. (Concentric Media )
Entertainment

Masha Savitz
View profile
Follow
biggersmaller
Print
Is our fundamental right to vote and those whose job it is to ensure and protect this right becoming extinct like grizzly bears and Atlantic salmon? Stealing America: Vote by Vote, a documentary directed and produced by Emmy Award-winning Dorothy Fadiman, examines this question with chilling results.

Fadiman’s career has been highlighted by making films about social justice and human rights. She explains her inspiration for making the film in the press notes: “I was working at the polls as a volunteer in Florida on Election Day 2004. I kept hearing about citizens who voted for one candidate, then watched in astonishment as another name lit up on the electronic screen. Throughout Election Day, I witnessed voters reporting this problem to election observers at the polls and on voter hotlines. I was struck by the frustration I observed, fueled by an increasing sense of suspicion as voters realized they could not trust the voting process. Right then and there I decided to make this film about the impact of this particular phenomenon.”

Fadiman’s scope widened when she realized that this was not a localized incident specific to Florida, or this election.

In the film, we hear first-hand accounts of voters who experience a myriad of “glitches” or problems, including votes being flipped from Kerry to Bush (almost never the other way around) when electronic voting machines were used, and of a shortage of voting machines in which some voters reported waiting up to 12 hours to vote. This seemed to occur predominantly in student and African American populations.

Additionally, there were statistically impossible discrepancies between the exit polls and the actual vote. These events, which seem unrelated and isolated when put in context, point to very deliberate action and reveal problems and breakdowns at every level of the electoral process.
Perhaps most disturbing was the media’s response, or lack thereof. When Ohio Senator Bob Hagan called the Democratic headquarters to report his experience of vote-flipping, he was told, in his own words, “Leave it alone, don’t talk about it, it’s not something we want to get out.” Investigative journalists describe how their attempts to get the information on voter fraud were thwarted by corporate media.

The main source of accurate information on what was really happening was on the Web by Internet reporters, referred to by investigative blogger Brad Friedman as an “army of citizen patriots.”
“The ultimate power in a political realm is controlling perception,” said Charles Lewis, who quit a successful career as producer of 60 Minutes to start the center for Public Integrity, which investigates political corruption and other ethics-related issues.

Also included in this film are many experts such as Robert F. Kennedy Jr., lawyer activist and author; Paul Craig Roberts, economist and former Assistant secretary to the Treasury under Reagan; and Ion Sancho, Leon County Supervisor of Elections appointed to count the votes in the disputed 2000 election; proving that it is possible to hack into voting machines and change votes.

There are a number of exposé-type documentaries that have come out over the last few years, each one revealing one more layer of corruption and greed. Stealing America seems to hit the core of our sense of democracy and the values we hold true as Americans. It is Fadiman’s intention to bring greater awareness of these matters as the November election approaches, urging citizens to take an active role in reclaiming their quickly eroding constitutional right.