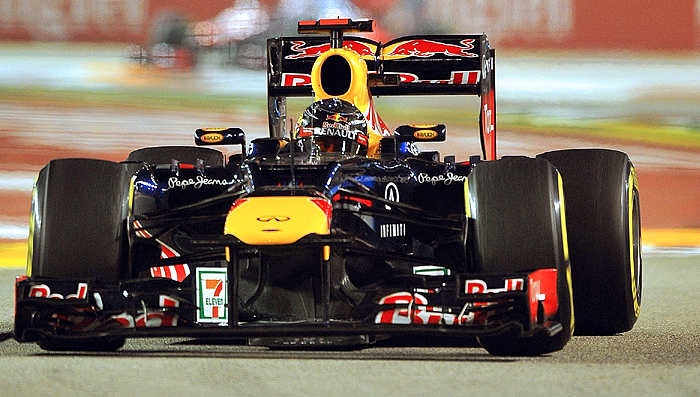 The battle for the World Drivers’ Championship continues at 2 a.m. Sunday morning with the Formula One Japanese Grand Prix at Suzuka.

With six races left in the 2012 Formula One season, every point will be hotly contested as Fernando Alonso, Sebastian Vettel, Kimi Raikkönen, and Lewis Hamilton all strive to add another title to their résumés.

With 150 points up for grabs, most of the field is still mathematically in the hunt but realistically, only these four drivers have a chance. Ferrari’s Alonso has 194 points, Red Bull’s Vettel, 165. Raikönnen is third with 149 and Lewis Hamilton, after his disastrous transmission failure while leading at Singapore, has 142.

With Ferrari’s latest updates not delivering the promised performance and McLaren having transmission woes, any of the top four drivers could while Vettel’s RB8 and Raikkönen’s ES20 deliver reliable performance, it is impossible to predict who might win the race, let alone the title.

Both Sebastian Vettel and Fernando Alonso emphasized this in interviews on formula1.com, F1’s official website.

“There’s a lot of races left and it’s a bit difficult to predict what’s going to happen,” said Vettel. “We have to make sure that we finish the races first of all. I think the pace is there, even if we are not quick enough to win then it is good enough to collect a lot of points.  It’s a tough championship so far but we’re still in it. We’re still looking forward to the next couple of races, and obviously the target at the moment is to beat Fernando.

“It’s a little bit difficult to predict,” Alonso agreed. “All this year we’ve been up and down for all the teams and it’s the same for us. For sure, we need to improve the performance we saw in Singapore. Maybe Silverstone is also quite similar to Suzuka and we were quite okay there so hopefully we can repeat that kind of performance.”

Suzuka’s twisting 18-turn, 3.6 circuit is challenge to drivers, with some high-speed corners, fast technical sections and very little runoff. Lewis Hamilton is a fan of the track.

“When I first raced here in 2009, I couldn’t believe a place like this could still exist in Formula One,” he told formula1.com. “It still feels like a proper old-school circuit. It doesn’t have the polish or finesse of an ultra-modern track, but is all the better for it.

“It’s fantastically quick, too, and very difficult to master. It’s an unforgiving place.

“In terms of the championship, there’s nothing to really be gained by analyzing the points tables. From now on, it’s simply gloves off. As in Singapore, I’ll come out fighting—I’ll just be hoping for a better result.”

Hamilton’s teammate Jenson Button, sixth with 119 points, will start five spots back from where he qualifies; engineers found that the transmission problem which sidelined Hamilton at Singapore was about ready to happen to Button’s gearbox as well. The team swapped the box and took the penalty.

Kimi Raikkönen has crept into thirds in the points without winning a race in his first season back in F1. Solid performances in a reliable car have let him rack up the points, but reliability alone won’t win the title, he knows. Lotus is developing new parts for the car constantly, trying to give their driver an edge.

“We should get some new parts and setting up the car the way I like it to be depends on the weather and on the circuit. We know the speed is there in our car, we just have to find the right set-up to maximize it every time.

“We give it our best shot to be on the podium, but the races are going to get more and more difficult with other teams constantly pushing with new development parts. It’s impossible to predict how our car will go. We have to wait until Friday practice to decide how to approach the race.”

The race will be broadcast on Speed-TV on Oct. 7 starting at 2. a.m. ET. Qualifying will air at 1 a.m. Saturday.