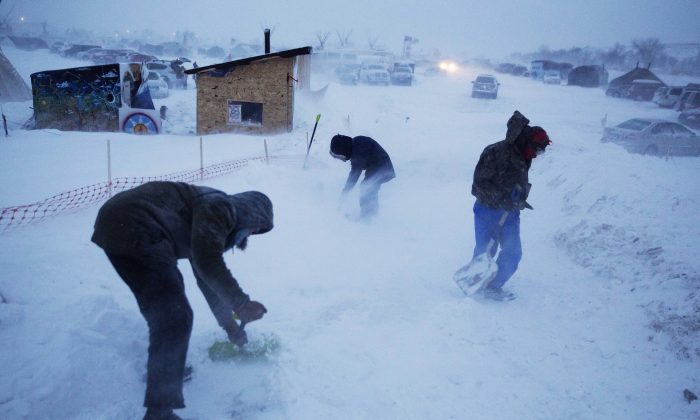 Campers shovel out an exit ramp at the Oceti Sakowin camp where people have gathered to protest the Dakota Access oil pipeline in Cannon Ball, N.D. on Dec. 6, 2016. Many Dakota Access oil pipeline opponents who've gathered for months in the camp are committed to staying despite wintry weather and demands that they leave. An overnight storm brought several inches of snow, winds gusting to 50 mph and temperatures that felt as cold as 10 degrees below zero. (AP Photo/David Goldman)
US

BISMARCK, N.D.—For protesters fighting the Dakota Access pipeline, the messages from the Standing Rock Sioux reservation are confusing: The tribal chairman tells demonstrators that it’s time to leave their camp and go home. Another leader implores them to stay through the bitter North Dakota winter.

The conflicting requests show how the camp’s purpose has widened beyond the original intent of protecting the tribe’s drinking water and cultural sites into a broader stand for Native American rights.

Camp occupants are working through the confusion, said Jade Begay, an organizer with the Indigenous Environmental Network. “The rest of the world just needs to hold tight and be patient,” he said.

Since August, the camp on federal land near the reservation and the pipeline route has been home to thousands of people protesting the four-state $3.8 billion pipeline designed to carry oil to a shipping point in Illinois.

Archambault said there’s no reason for people to put their lives at risk because no additional pipeline work is expected for months. The company building the project, Energy Transfer Partners, and the Army Corps of Engineers are battling in court over permission to dig under the Missouri River reservoir that provides the tribe’s drinking water. It’s the last big unfinished segment of the 1,200-mile pipeline.

The camp rejoiced Sunday when the Army announced that it would not issue an easement for the pipeline to cross under Lake Oahe, but it’s unclear what might happen when pipeline supporter Donald Trump enters the White House in January. The dispute also could be decided by a federal judge.

“We are not in the clear by any means whatsoever,” Iron Eyes said. “This is not a time for celebration. If it’s a time for anything … it’s a time to honor all the sacrifices that have been made” by camp occupants. More than 500 have been arrested since August.

The camp began as a peaceful, prayerful protest of the pipeline. It has since drawn in people who believe the dispute represents an overall stand for American Indian rights.

Iron Eyes said protesters need to stand up for other tribes and treaty rights. “We don’t stand in a place to tell people to leave,” he said.

Camp occupants are “working on finding a middle ground and some sort of compromise” through informal discussions, according to Begay, who lives in Tesuque, New Mexico.

“These kinds of decisions don’t happen in just a day or two,” she said. “We need to consider everybody’s safety, everybody’s goals, the different points of view.”

The Corps recently declared the camp area closed to public access and said those who remain are trespassing, but the agency is not issuing citations. North Dakota Gov. Jack Dalrymple has also called on camp occupants to leave, and Sen. John Hoeven issued a similar plea Wednesday from the floor of the Senate.

Iron Eyes said he believes the calls for people to leave the camp are aimed at limiting liability, and he said those who stay do so at their own risk. But he implored people “who understand the inherent risks of staying in a North Dakota winter to stand with us, because this pipeline is not finished, and we have to stand strong and stay vigilant.”

Archambault acknowledged the efforts of people who came from around the world to support the tribe. But, he said, “their purpose has been served.”