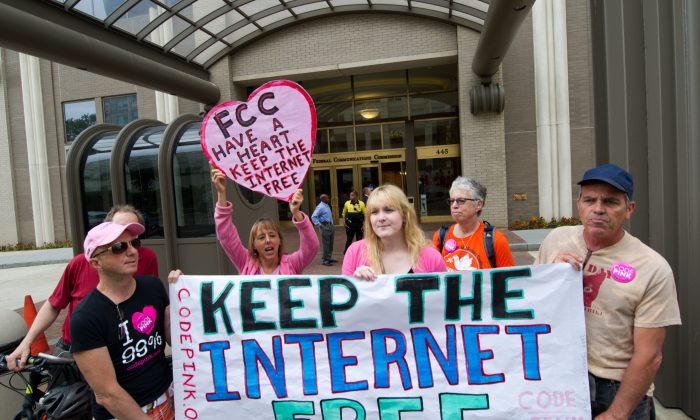 Protesters hold a rally to support “net neutrality” at the Federal Communications Commission (FCC) in Washington, D.C., on May 15, 2014. (Keren Bleier/AFP/Getty Images)
Opinion

Staving Off Traffic Jams Along the Information Super-Highway

Every major consumer group, a nationwide coalition of mayors, and thousands of startups and small businesses have joined millions of people in urging the FCC to save 'Net Neutrality'

There was no vacation for the Internet this summer.

While many Americans slipped away to the beach, Internet users were busy defending the openness of a network that has become this era’s engine for free expression, ingenuity, and just about everything else.

The threat comes from Federal Communications Commission Chairman Tom Wheeler, who has proposed new rules that would fundamentally change the workings of the Web—leaving its fate in the hands of a few powerful phone and cable companies.

Wheeler, who previously led the cable and wireless industries’ top lobbying groups, has sworn to “strongly support an open, fast and robust Internet.” He has said he’d never allow an Internet with fast lanes for the few companies that can afford them and slow lanes for the rest of us.

But his proposal undermines his rhetoric. The proposed rules are built on a legal argument for protecting the Internet that is so flimsy it would let network providers like Comcast, AT&T, and Verizon slow down some sites and speed up others.

For example, Comcast could favor its own video-streaming service over Netflix or YouTube by making those popular sites so sluggish that consumers would have no option but to switch to Comcast’s own product.

Wheeler’s rules hand these providers the tools to upend the level playing field that’s been a driver of online innovation since the Internet’s inception. His proposal for protecting the open Internet falls so spectacularly short that all of the major phone and cable companies are lobbying Washington to support it. That pretty much tells you all you need to know.

But in May, the rest of us got our turn. The FCC opened its online comment tool and invited anyone and everyone to tell the agency what they thought of Wheeler’s plan.

And as the July deadline for public feedback approached, so many people flooded the agency with comments that the FCC’s website sputtered to a halt, incapable of handling the incoming traffic.

A deep dive into the comments by data analysis firm Quid found near-unanimous support for “net neutrality,” the principle that establishes Internet users’ right to connect with anyone else on the network without their service providers discriminating, censoring, or otherwise interfering with their communications.

Equally unanimous was opposition to Wheeler’s approach. Every major consumer group, a nationwide coalition of mayors, and thousands of startups and small businesses joined millions of people in urging the agency to abandon the chairman’s proposal.

Many asked Wheeler and his fellow commissioners to use the FCC’s congressionally approved authority to reclassify ISPs as common carriers—as services that must transmit information without discrimination.

Throughout the summer people have called on Chairman Wheeler and his fellow commissioners to visit their communities and meet face-to-face to discuss what’s next for “net neutrality.”

Wheeler, more a creature of the Beltway than a man of the people, has been reluctant to respond. His predecessors, from both Democratic and Republican administrations, felt a civic obligation to travel the country and engage people in town hall meetings. It’s a necessary process that put the FCC’s leadership before an enthusiastic, if often angry, public. (FCC Commissioner Mignon Clyburn has called on Wheeler to convene “net neutrality” hearings outside of Washington, D.C., but so far to no avail.)

Wheeler can dodge this issue for only so long. As summer turns to fall—and people’s passion for an open Internet comes into even sharper focus—the public’s demands must be heard.

Timothy Karr is the senior director of strategy for Free Press. This article previously published at OtherWords.org.