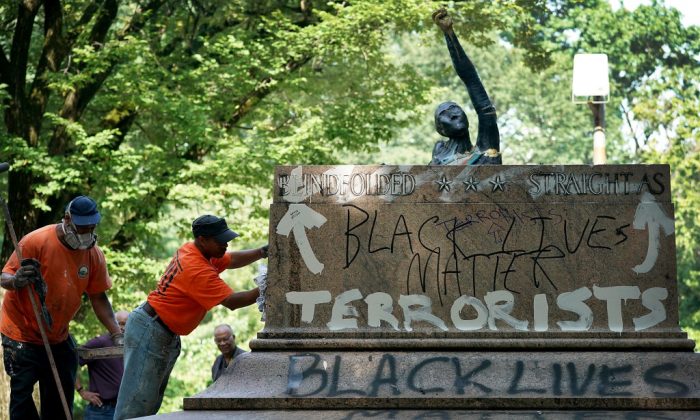 Baltimore city contractors removed a statue depicting the fifth Chief Justice of the United States along with three Confederate monuments in an overnight operation that started on Tuesday, Aug. 15.

Workers used heavy machinery to tear the statues from their pedestals and load them onto trucks to be haled away. The move ends a year of indecision in Baltimore about relics to the city’s Confederate history, The Baltimore Sun reported.

It is unclear how the statue depicting Roger B. Taney was lumped in. Taney was the fifth chief justice of the United States and personally administered the oath of office to Abraham Lincoln. Although Taney’s views on race were in opposition to Lincoln’s, he never went South to join the Confederate states during the Civil War.

The removal was ordered by Mayor Catherine Pugh, a Democrat, and backed unanimously by the Baltimore City Council, which is made up entirely of Democrats.

According to Pugh, the nighttime operation was designed to prevent violence similar to that in Charlottesville, Virginia, over the weekend.

“I did not want to endanger people in my own city,” she said. “I had begun discussions with contractors and so forth about how long it would take to remove them. I am a responsible person, so we moved as quickly as we could. “

Pugh, who watched the removal in person, said that the city has not made plans for what will happen next to the statues.

After the removal, the pedestals were quickly vandalized with spray painted anarchy symbols and the words “Black Lives Matter.”

The overnight removals in Baltimore were triggered by violent events in Charlottesville, Virginia, over the weekend, where clashes erupted over the removal of a Confederate statue.

In Baltimore, activists threatened to topple the Confederate statues unless officials acted quickly.

The work to remove the monuments started at 11:30 p.m. on Tuesday and continued through the night till 5:30 a.m. Wednesday.

Joules, a passerby who did not give her last name, saw workers move the Robert E. Lee and “Stonewall” Jackson Monument at around 3:20 a.m.

“Way to be, Baltimore, sneaky style, and do it in the middle of the night,” she said.

Joules wanted to know where the monuments were being hauled away to and what will become of them.

“I feel like it’s a deep issue. They’re accurate, archived documentation of the position and rank of these two men. … But I’m not hee-hawing the Confederate flag,” she said. “Maybe it belongs in a Confederate cemetery.”