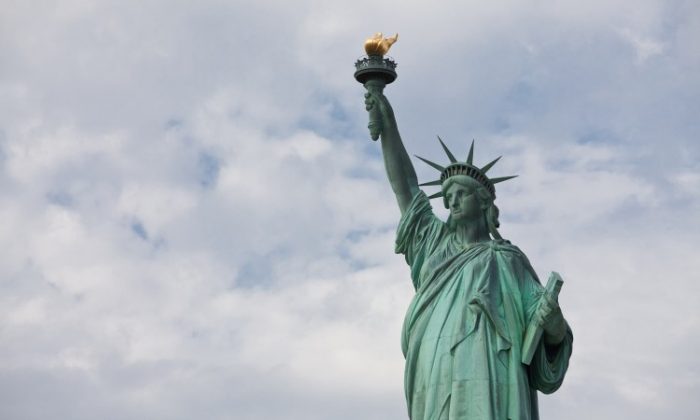 Statue of Liberty to Reopen by July 4

NEW YORK—The Statue of Liberty, which has been closed since Oct. 29, 2012, due to damage sustained during Hurricane Sandy, is expected to reopen by the July 4 holiday.

“July Fourth is the perfect day to reopen a symbol of our nation’s freedom, and speaks volumes about New York’s resilience,” said Sen. Charles E. Schumer (D-N.Y.) in a March 19 news release.

The 126-year-old statue remained unharmed during the storm; however, Liberty Island, which houses the statue, sustained heavy damage from the storm surge. More than one-half of the island was covered in 8 feet of water. Paving stones were overturned, railings were broken, and one of the docks was destroyed.

Ellis Island, which houses the Immigration Museum, is not expected to reopen by July 4, and no timetable has been given.

“Being open for the summer tourism season isn’t just important symbolically, it’s a boon to the city’s economy and businesses, as the statue attracts millions of tourists from all over the world to our shores,” said Schumer.

According to a report released last month, the National Parks Service showed that 3.7 million people visited the Statue of Liberty National Monument in 2011, generating $174 million in economic activity.

Statue Cruises, the official harbor cruise for the island, was directly affected by the closing of the statue. The cruise company lost 80 percent of their business. In late December, the company began offering hour-long tours that loop around the statue.

“We are looking forward to putting our crew back to work carrying visitors to the world’s greatest symbol of liberty. In the interim, we offer a great cruise to Lady Liberty with uniformed rangers on board departing frequently from Battery Park,” Terry MacRae, CEO and founder of Statue Cruises, said in a March 19 press release.

As the weather heats up and more tourists begin to flock to the Big Apple, Statue Cruises will increase their trips to 20 per day, running every 30 minutes.