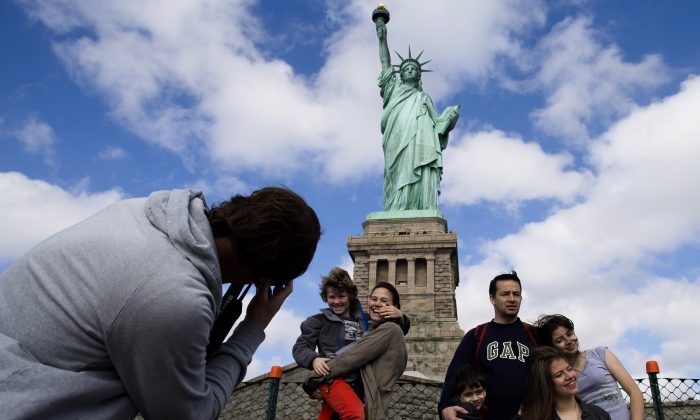 Tourists pose for photographs in front of the Statue of Liberty in New York Harbor, Oct. 13. 2013. (John Minchillo/AP)
New York

NEW YORK—In spite of the federal shutdown, the Statue of Liberty is back open for business. The state of New York negotiated a deal with the federal government to reopen the national icon to tourists and New Yorkers alike starting on Oct. 13.

Under the agreement reached late Friday, the state will pick up the $61,600 daily tab, which is normally paid for by the federal government. The government has been shut down since Oct. 1, after a budget deal could not be reached in Congress. National parks are among the many services on hold until an agreement can be made.

For vendors whose livelihood depends on Lady Liberty, the shutdown was the latest blow to what has been an already rough year.

“After surviving a natural disaster, we are once again struggling to survive,” said Brad Hill, president of Evelyn Hill, the concessionaire for Statue of Liberty and Ellis Island. Hill said business was down 70 percent this year.

Lady Liberty has been open just 89 days in 2013, which has been a crushing financial blow to businesses that thrive on tourism.

Mike Burke, the chief operating officer of Statue Cruises, said that without the intervention he would have laid off 120 of his employees on Oct. 15.

“The front end of the year we probably lost something like $20 million in revenue those first six months,” Burke said Sunday. “We are relieved.”

October is typically a busy month for his business, Burke said, adding that the weather has cooperated, giving an even bigger boost.

Continued Funding
The current deal with the federal government is only for six days, however. Cuomo said he would continue to renew it until the government is back up and running, no matter how long that may be.

“Just on the economics of the matter, it makes obvious sense for us to pay for the cost of operation, which pales in comparison to the amount of money we are now losing,” Cuomo said.

When asked if he would have to take money away from other programs or funds to pay for this, he said, “We will find a way to do it.”

New York state was one of several states to pick up the tab for national parks. Arizona agreed to pay to get the Grand Canyon reopened, while South Dakota will fund Mount Rushmore reopening.