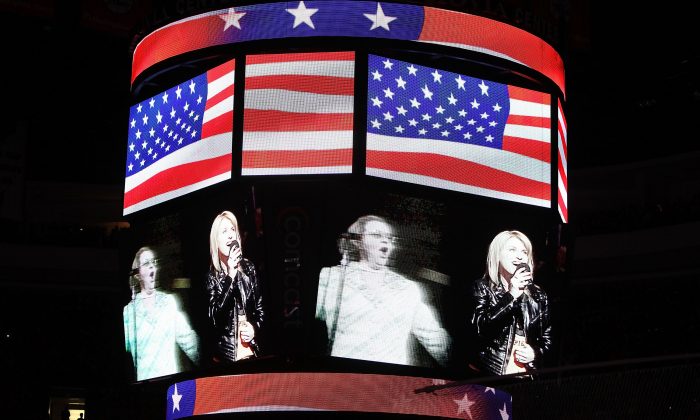 A statue of Kate Smith, who sang “God Bless America,” was covered up in Philadelphia as sports teams stopped playing the song at home games.

Smith’s statue has stood at the Philadelphia Flyers sports complex since 1987; it was relocated from outside of the old Spectrum Arena when the arena was demolished in 2011.

The Flyers also said that the team was joining the New York Yankees and wouldn’t play “God Bless America” anymore, attributing the choice to lyrics in some of Smith’s other songs.

“We have recently become aware that several songs performed by Kate Smith contain offensive lyrics that do not reflect our values as an organization,” the Flyers, a hockey team, said in a statement.

The Kate Smith statue near the Wells Fargo Center is covered, amid reports the @NHLFlyers have cut ties with Smith over racist song lyrics. pic.twitter.com/I6eCsT5oRl

“As we continue to look into this serious matter, we are removing Kate Smith’s recording of ‘God Bless America’ from our library and covering up the statue that stands outside of our arena.”

Smith passed away in 1986 at age 79. She was an accomplished singer and radio star who appeared on a number of programs across the major networks and released dozens of successful recordings from the 1930s to the 1960s, including a number of songs that were popular nationwide.

For her contribution to the country, Smith was awarded the Presidential Medal of Freedom by former President Ronald Reagan in 1982.

Calling her one of North Carolina’s “most distinguished residents,” Reagan said Smith was one of America’s “great singers.”

“Her splendid voice alone has earned her a place in the history books, but it’s also won her a place in our hearts, because of the extra something that reaches out to the spirit as well as to the ear of the listener,” Reagan said at the ceremony. He said her voice was one of the most inspiring things heard by troops during World War II and other wars.

She is best known currently for her rendition of “God Bless America” that was recorded in 1939, about two decades after its creation by Irving Berlin in 1918.

According to the right-leaning Washington Examiner, the lyrics are racist but the song may have been satirical.

“The song was likely satire. ‘That’s Why Darkies Were Born’ was first performed in 1931 through ‘George White’s Scandals,’ a series of Broadway revues. Reports say the song was considered to be satire, and revues are known as a collection of sketches with typically satirical themes. Singer Paul Robeson, who was black, also performed the song,” wrote columnist Madeline Fry.

“If ‘That’s Why Darkies Were Born,’ isn’t satire, the lyrics are inexcusable. As satire, it’s scathing, progressive commentary,” Fry added.

Critics, including the left-leaning NY Daily News, noted that she recorded at least one other song that might be considered offensive, “Pickaninny Heaven,” in which she sang that “colored children” should enjoy “great big watermelons” along with other treats.

The Flyers’ decision came after the Yankees announced that the team would no longer broadcast “God Bless America.”

“The Yankees have been made aware of a recording that had been previously unknown to us and decided to immediately and carefully review this new information,” a club spokesman told the Daily News. “The Yankees take social, racial, and cultural insensitivities very seriously. And while no final conclusions have been made, we are erring on the side of sensitivity.”