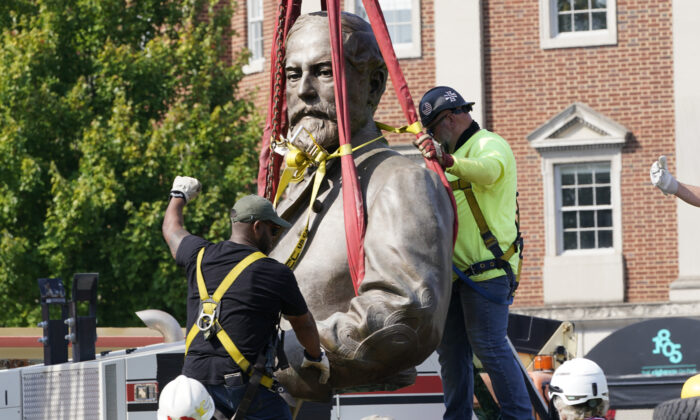 Crews remove the torso of Confederate General Robert E. Lee, one of the country's largest remaining monuments to the Confederacy, on Monument Avenue in Richmond, Va., on Sept. 8, 2021. (Steve Helber/AP Photo)
Regional News

A statue of Confederate Gen. Robert E. Lee was dismantled in Virginia’s capital on Wednesday, ending months of legal wrangling.

The 21-foot statue of Lee atop a horse had sat on a 40-foot pedestal at the intersection of Monument Avenue and North Allen Avenue in Richmond since May 29, 1890. Its unveiling drew a crowd estimated at as many as 150,000.

Legal challenges delayed the move, but it finally went through on Wednesday morning.

Workers removed the statue with a crane, slicing it into pieces because it was too large to transport as a crowd that included Northam looked on. The pedestal, covered with graffiti from protests and riots last year, is set to remain in place for now.

“After 133 years, the statue of Robert E. Lee has finally come down—the last Confederate statue on Monument Avenue, and the largest in the South. The public monuments reflect the story we choose to tell about who we are as a people. It is time to display history as history, and use the public memorials to honor the full and inclusive truth of who we are today and in the future,” Northam said in a statement.

The statue is destined for storage until officials decide what should be done with it.

Glenn Youngkin, the Republican gubernatorial nominee who is facing off against former Gov. Terry McAuliffe to succeed Northam, said during a recent debate that he hopes it is placed on public display.

“I hope they move it to a battlefield or museum, so we don’t lose the fact that we have a history, we all need to know it,” said Youngkin, who opposed its removal.

Some of the watchers on Wednesday cheered. Chants popular among Black Lives Matter activists, such as, “Whose streets? Our streets?” were heard. Observers said it was about time the statue came down.

“Lee fought on the wrong side, he fought to keep my ancestors in chains,” Lamont Rigs, a retired U.S. Army veteran who lives in Richmond, told the Richmond Times-Dispatch. “This is glorious.”

“They just need to get rid of them all. They served their purpose. They were used to intimidate. I’m happy to see it come down,” Nicole Carter, a mental health counselor, added to The Virginian Pilot.