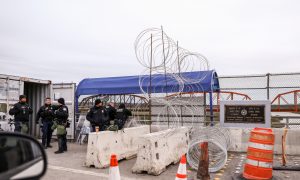 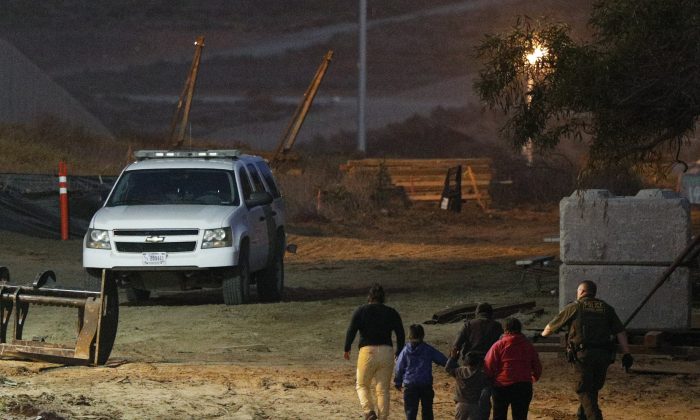 Illegal aliens are escorted by a U.S. Border Patrol agent as they are detained after climbing over the border wall from Playas de Tijuana, Mexico, to San Ysidro, Calif., on Dec. 3, 2018. (Rebecca Blackwell/AP Photo)
US News

MONTPELIER, Vt.—The number of people apprehended along the U.S. border with Canada is continuing to climb, according to newly released statistics from U.S. Customs and Border Protection.

Of the 2018 total, 963 or about 22 percent, were apprehended after illegally crossing the border from Canada, a figure that is a subset of the larger number, which includes people apprehended by border agents inside the United States near the Canadian border who authorities were unaware of how they entered the country.

The northern border numbers are tiny compared to the southern border where just less than 400,000 individuals were apprehended in fiscal 2018.

The Border Patrol sector that includes much of upstate New York, Vermont, and New Hampshire accounted for more than half of the people along the entire border who entered illegally from Canada. In the 2018 fiscal year, 548 people were apprehended along the nearly 300-mile  stretch of border known to the Border Patrol as the Swanton Sector. That figure is more than three times higher than the 165 people apprehended in 2017, which was slightly lower than the 214 people picked up in 2016.

Border agents have said that in some cases, sophisticated smuggling rings will bring people across the border and hand the crossers off to people sent to meet them. In others, documents show people will walk across the border from Quebec into the United States and then call a taxi to be taken further south.

In a recent case outlined in federal court documents filed on March 11 in the Northern District of New York, Border Patrol agents arrested four people in a van Sunday in in Bangor, New York, just south of the Canadian border. Three Mexican citizens told agents they flew into Canada in mid-February, had just crossed the border into the United States, and were going to pay the driver of the van differing amounts to be taken further into the country.