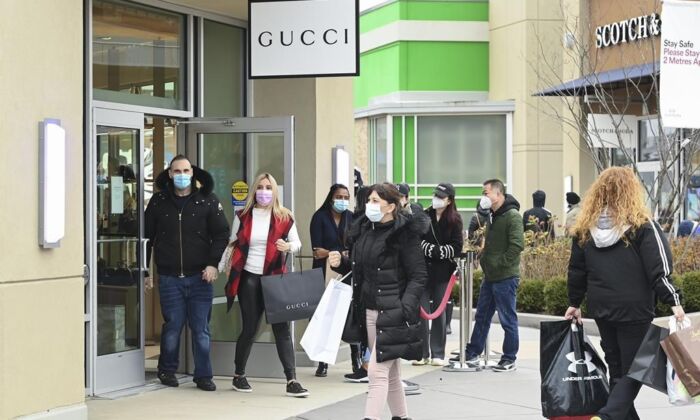 People line up at the Toronto Premium Outlets mall on Black Friday for shopping sales during the COVID-19 pandemic in Milton, Ont., Nov. 27, 2020. (The Canadian Press/Nathan Denette)
Canada

Statistics Canada Says Economy Grew 0.6% in November, Gets Back to Pre COVID Level

OTTAWA—Statistics Canada says real gross domestic product rose 0.6 percent in November before COVID-19 cases began to surge at the end of the year.

The growth in November marked the sixth consecutive monthly expansion and pushed the economy above pre-pandemic levels by 0.2 percent, the agency said Tuesday.

Gains in November were seen in wholesale trade, which saw its largest monthly growth since July 2020, and manufacturing.

Accommodation and food services also both saw increases with more travellers and looser restrictions on capacity limits in bars and restaurants in Ontario and Quebec.

The statistics agency also said its initial estimate for December suggested real GDP was essentially unchanged for the final month of 2021 to bring growth to 4.9 percent for the full year.

The result, which won’t be finalized until next month, is a turnaround from 2020 when the Canadian economy suffered its worst year on record as output shrank by 5.4 percent.

Driving to the finish line of 2021, Statistics Canada estimated the economy grew at an annualized rate of 6.3 percent in the fourth quarter.

The Bank of Canada warned last week that it expects Omicron to dampen spending in the first quarter, and slow growth to an annualized rate of about two percent.

Royce Mendes, managing director and head of macro strategy at Desjardins, said he expects the economy contracted in January under the weight of Omicron.

He added that fourth-quarter growth will likely surpass the central bank’s forecast given the strong November reading, leaving the Bank of Canada on track to hike rates starting in March.