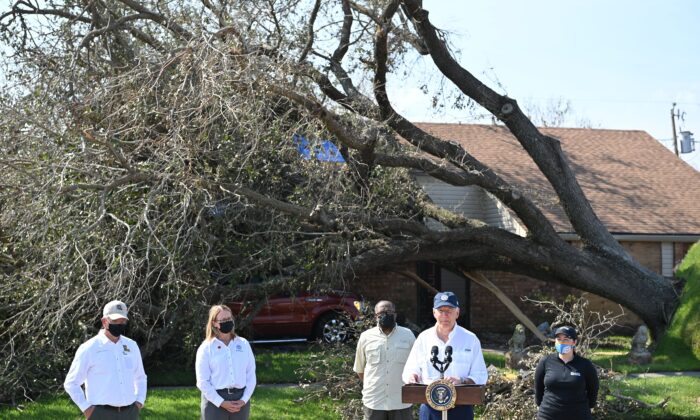 President Joe Biden delivers remarks after touring the Cambridge neighborhood affected by Hurricane Ida, in LaPlace, Louisiana, on Sept. 3, 2021. Biden has attributed the severity of storms like Ida to the “climate crisis.” (Mandel Ngan/AFP via Getty Images)
By Nathan Worcester

A new study in “Climate Dynamics” has criticized a key methodology that the Intergovernmental Panel on Climate Change (IPCC) uses to attribute climate change to greenhouse gases, raising questions about the validity of research that relied on it and prompting a response from one of the scientists who developed the technique.

The new study’s author, economist Ross McKitrick, told The Epoch Times in an exclusive interview that he thinks his results have weakened the IPCC’s case that greenhouse gases cause climate change.

The methodology, known as “optimal fingerprinting,” has been used to link greenhouse gases to everything from temperature to forest fires, precipitation, and snow cover.

“[They] take this big smudge of data and say, ‘Yeah, the fingerprints of greenhouse gas are on it,’” he said.

But according to McKitrick, the authors of that paper, Myles Allen and Simon Tett, made errors in the steps needed to validate their strategy.

“When you do a statistical analysis, it’s not enough just to crunch some numbers and publish the result and say, ‘This is what the data tell us.’ You then have to apply some tests to your modeling technique to see if it’s valid for the kind of data you’re using,” he said.

“They claimed that their model passes all the relevant tests—but there are a couple of problems with that claim. The first is they stated the conditions wrong—they left most of the relevant conditions out that you’re supposed to test—and then they proposed a methodology for testing that is completely uninformative. It’s not actually connected to any standard testing method.”

“You’re dependent on climate model data to construct the test—and the climate model already embeds the assumptions about the role of greenhouse gases,” said McKitrick. “You can’t relax that assumption.”

McKitrick, who explained his results in more technical detail at JudithCurry.com, said the IPCC’s attribution of climate change to greenhouse gases is largely based on the 1999 paper or closely related research with the same problems.

Myles Allen, co-author of the 1999 paper McKitrick challenged, responded to McKitrick’s paper in an email to The Epoch Times.

“Fully addressing the issues raised by this paper might have made some difference to conclusions regarding human influence on climate when the signal was still quite weak 20 years ago,” Allen said.

He said the signal is now much stronger, whether one uses his 1999 technique or the simpler method employed at GlobalWarmingIndex.org. He also said that newer methods, including one in his own 2003 paper, have superseded the method from 1999.

“To be a little light-hearted, it feels a bit like someone suggesting we should all stop driving because a new issue has been identified with the Model-T Ford,” Allen said.

McKitrick responded to Allen’s argument in an email: “Even if it were true that [Allen’s method] is no longer used and people have moved on to other methods, [given] its historical prominence, it would still be necessary as a scientific matter for Simon and Myles either to concede their paper contains errors or rebut the specific criticisms.

“And the reality is the climate profession hasn’t moved on. The IPCC still discusses the Optimal Fingerprinting method in the AR6 and relies on many papers that use it.”

While Allen argued that his later 2003 paper superseded his 1999 paper, McKitrick responded that the 2003 paper, along with other more recent methods that Allen identified, “has all the same problems.”

McKitrick also argued that the method at GlobalWarmingIndex.org may have the same issues as Allen’s 1999 paper in large part because both studies cite a 1997 study from Klaus Hasselmann, which, McKitrick said, proposes the same method.

“Thus by Myles’ own examples, AT99 is still central to the attribution literature,” McKitrick said.

Allen argued that McKitrick’s criticism of his use of a climate model is misguided, as his 1999 method may actually be “overly conservative” in attributing climate change to human influence.

According to Allen, standard climate models may yield results in which the amount of statistical “noise,” and thus uncertainty, is overstated.

This rebuttal, McKitrick said, “does not address the core problem I point out,” which has to do with testing for errors in their fingerprinting calculations.

Allen and McKitrick also sparred over a specific statistical test in the 1999 paper, with Allen saying McKitrick had greatly overstated its importance and McKitrick countering that it is the only such test researchers have used in this context.

Attribution researcher Aurélien Ribes, whose papers were among those Allen claimed had superseded the 1999 research, declined to comment on the paper in detail in an email to The Epoch Times, though he said he had looked at an earlier version of it.

“I do not expect a very large impact in terms of attribution results,” said Ribes, a climate change researcher at France’s National Centre for Meteorological Research.

He said that some of his own research wasn’t dependent on fingerprinting. He also said that certain attribution findings, such as on global mean temperature, are “very robust.”

But another expert, Richard Tol, believes much of McKitrick’s criticism is on the mark.

Tol said that Allen and Tett’s attempt to address a widespread statistical issue had “made things worse, not better.”

“To top it all off, many people have since used the method proposed by Allen & Tett,” he said.

“The implications are unclear. Many of the papers that use the fingerprinting method to detect the impact of climate change are simply wrong.”

“That does not mean that climate change is not real or that its effects cannot be attributed to greenhouse gas emissions. It means that many of the papers that made such claims will have to be redone.”