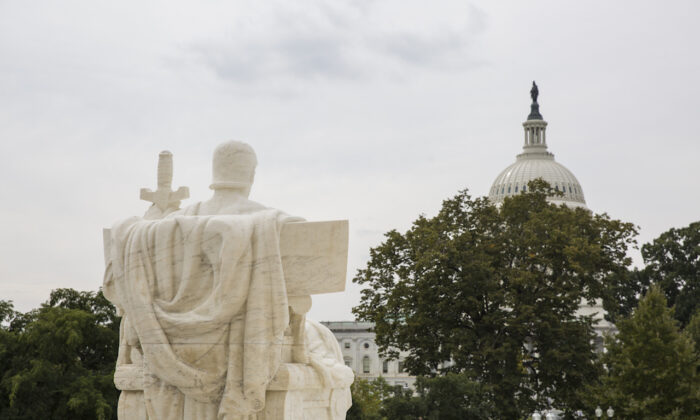 The Supreme Court of the United States in Washington on Sept. 22, 2017. (Samira Bouaou/The Epoch Times)
By Janita Kan

Three states and the city of New York are asking the Supreme Court to suspend the enforcement of the “public charge” rule until the CCP virus pandemic is over.

The public charge rule that went into effect nationwide in February makes immigrants inadmissible to the United States or potentially ineligible for permanent residency or a visa renewal if he or she is likely to become a public charge at any time in the future.

It will consider a person a public charge if they receive at least one government benefit for more than 12 months in the aggregate in a three-year period.

New York Attorney General Letitia James and the attorneys general of two other states—Connecticut and Vermont—and New York City filed a motion on Monday urging the top court to halt the implementation of the new rule because they claim it discourages immigrants and their families from accessing healthcare and public benefits needed to prevent the spread of the COVID-19, the disease caused by the virus, or mitigate the economic impact caused by the virus.

“By deterring immigrants from accessing publicly funded healthcare, including programs that would enable immigrants to obtain testing and treatment for COVID-19, the Rule makes it more likely that immigrants will suffer serious illness if infected and spread the virus inadvertently to others—risks that are heightened because immigrants make up a large proportion of the essential workers who continue to interact with the public,” the states argued in their motion (pdf).

This comes after the Supreme Court in January lifted nationwide injunctions issued by a New York District Court and upheld by the 2nd Circuit that blocked the rule from going into effect. Then in February, the top court lifted a similar injunction that prevented the rule from going into effect in Illinois. The effect of the two decisions allows the Trump administration to enforce the rule nationwide while the appeals play out in court.

In their filing on Monday, James and the other attorneys general argued that the current global pandemic had significantly altered American society since the two Supreme Court decisions. The CCP virus had thrown the country into an “unprecedented crisis” and “exacted a tremendous toll on the nation,” they said.

“Failure to immediately stay implementation of the Rule so that we can take the steps necessary to contain and mitigate the outbreak of the disease puts the public health and safety of our communities at increased risk,” the attorneys general wrote.

Then on March 13, the DHS posted an alert on the U.S. Citizenship and Immigration Services (USCIS) website, which stated that the agency would not consider testing, treatment, and preventative care related to COVID-19 when determining whether a person is a public charge in order to address concerns that immigrants fear to public charge consequences.

The alert also stated that USCIS would need to consider the receipt of certain cash and non-cash public benefits including ones related to the testing or treatment of COVID-19 as part of a public charge determination for immigrants and nonimmigrants seeking an extension of stay or change of status.

In a subsequent letter (pdf), James sought clarification from DHS about what appears to be contradicting advice and to continue urging the agency to suspend the rule. James says she still has not received a response to that letter.

The motion asks the Supreme Court to reverse or modify its decision to allow the rule from taking effect until the national emergency concerning COVID-19, which was declared on March 13, is over.

“Every person who doesn’t get the health coverage they need today risks infecting another person with the coronavirus tomorrow,” James said in a statement.

“Immigrants provide us with health care, care for our elderly, prepare and deliver our food, clean our hospitals and public spaces, and take on so many other essential roles in our society, which is why we should all be working to make testing and health coverage available to every single person in this country, regardless of immigration status,” she added.

The public charge rule was challenged by several states and immigration groups, leading to injunctions that prevented the rule from going into effect on Oct. 15, 2019. Two federal appeals courts—the 4th Circuit and the 9th Circuit—lifted similar injunctions in December 2019. But the 2nd Circuit has refused to set aside a pair of injunctions issued by a New York District Court, prompting the Trump administration to file an emergency request (pdf) to the top court earlier in January to lift those blocks.

Opponents of the rule say it discourages immigrants and their families from accessing necessities such as health, food, and housing programs that supplement their wages and “help them make ends meet.”

Meanwhile, Ken Cuccinelli, acting director of Citizenship and Immigration Services, previously said that the rule was implemented because the administration wanted to “see people coming to this country who are self-sufficient.”