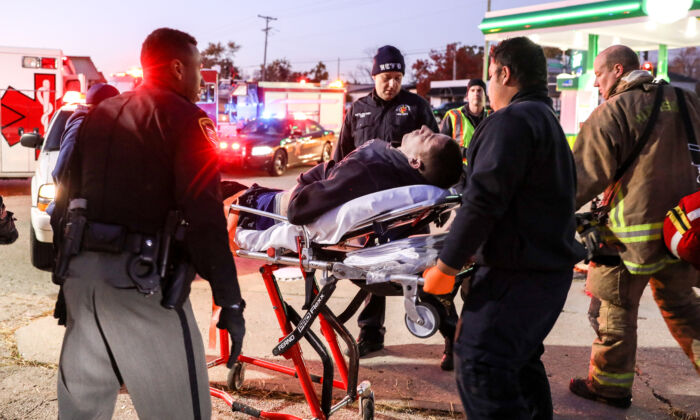 Ohio has been beleaguered by the opioid crisis for years. It has one of the highest overdose rates in the country, next to West Virginia, Kentucky, and Delaware.

As with all states, nearly every grain of fentanyl that Arkansas law enforcement seizes has traveled across the U.S.–Mexico border.

In 2021, Arkansas State Police confiscated 10 pounds of fentanyl, enough to kill more than 2 million people, according to Gov. Asa Hutchinson. Two milligrams of fentanyl can be fatal.

In Georgia, fentanyl-involved deaths increased by more than 106 percent during fiscal year 2021, according to Gov. Brian Kemp.

On April 19, the Republican governors of 26 states announced the creation of a new Border Strike Force, which aims to “disrupt and dismantle transnational criminal organizations.”

“The porousness of the Southern Border is an open door to transnational criminal organizations that use it to traffic drugs that feed the addiction epidemic throughout the United States,” the memorandum of understanding states.

“In the absence of federal leadership, states are partnering together to create the American Governors’ Border Strike Force to disrupt and dismantle transnational criminal organizations by increasing collaboration, improving intelligence, investing in analysis, combating human smuggling, and stopping drug flow in our states,” the agreement states.

The amount of drugs being seized at the border has plummeted as illegal alien apprehensions have reached record highs, according to Customs and Border Protection statistics.

“If we seize even 5 percent of what’s coming across the border, we’re lucky,” said Brandon Judd, president of the National Border Patrol Council, referring to a question about fentanyl pills.

“And if there’s nobody there to detect you and apprehend you, the cartels are going to push it through between the ports of entry when they know that there is absolutely no chance that we’re going to apprehend that narcotic.”

More than 100,000 Americans, a record amount, died of drug overdoses in the 12-month period ending in April 2021, according to data from the Centers for Disease Control and Prevention. Fentanyl was involved in almost two-thirds of those deaths.

The group of governors, in their memorandum of understanding, pledged to work together to “serve as a force multiplier to target cartels and criminal networks financially and operationally.”

“Together, governors will improve public safety, protect victims from horrific crimes, reduce the amount of drugs in our communities, and alleviate the humanitarian crisis at the Southern Border,” the agreement states.

States can request help from other participating states and state-specific certifications and licenses will be honored among states. Each state is responsible for its own costs.

Currently, 160 National Guardsmen from Georgia are stationed at the southern border.

“As new and even larger waves of migrants approach the border, I grow increasingly concerned for their safety,” Kemp wrote in a March 31 letter to President Joe Biden. The body of Texas National Guard Specialist Bishop E. Evans was recovered from the Rio Grande on April 25 after he drowned while attempting to rescue illegal immigrants—who were later identified as allegedly being involved in marijuana trafficking.

Hutchinson said one of the most important elements of the Border Strike Force is the sharing of intelligence on the operation of criminal organizations.

“Increased coordination with other states will be a benefit to our state and nation, but increased action from the federal government is still needed to help manage this,” he said.

Ohio is prepared to offer other states intelligence analyst support, if asked, the governor’s office said.

Since 2019, Ohio Gov. Mike DeWine has set up four narcotics intelligence centers in his state that help trace drug trafficking organizations back to their ringleaders and suppliers.

“Many times, those investigations reveal that Mexican cartels are behind the drugs being trafficked in Ohio,” DeWine’s office told The Epoch Times via email.

The 26 states also plan to review their state laws regarding human trafficking, drug trafficking, and transnational criminal organizations “to ensure that such crimes are prosecuted to the fullest extent of the law.”

“We’re currently in the process of determining what laws may need strengthening and where we can step up enforcement efforts in drug interdiction, human trafficking, and other crimes stemming from a porous southern border,” Hutchinson told The Epoch Times via email.

Texas just strengthened its anti-smuggling laws last September, while Arizona doesn’t have a state law against human smuggling, and border counties are suffering the impact.

The state has appropriated $3 billion for Operation Lone Star, which includes the arrest and prosecution of illegal alien trespassers, beefed-up law enforcement and National Guard presence along the border, and busing illegal immigrants to Washington.

Governors, Border Patrol agents, and border sheriffs have expressed concern over the revocation of Title 42—a public health provision that allowed for the quick expulsion of illegal immigrants.

The Department of Homeland Security has estimated that the end of Title 42 could mean up to 18,000 illegal alien apprehensions per day. Border agents are currently apprehending more than 6,000 per day.

Title 42 has slowly been whittled down by the Biden administration since February 2021—first to allow in all unaccompanied children, then families with children under the age of 7, then, most families in general, most single females, and then, single adults from non-Spanish-speaking countries.

“We are now processing illegal aliens from Northern Triangle (El Salvador, Honduras, Guatemala) under Expedited Removal rather than T[itle] 42,” Judd wrote on Twitter on April 19.