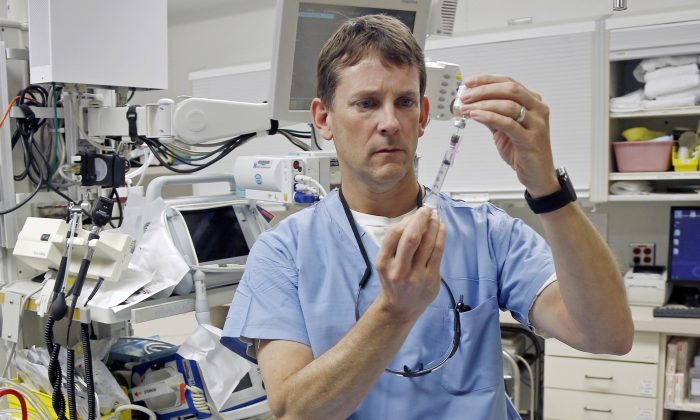 Dr. John Hick, a Hennepin County Medical Center emergency physician and a national expert in disaster planning, demonstrates preparation of an injection at the Hennepin County Medical Center in Minneapolis on Jan. 14, 2016. At the prodding of the federal government, state health departments nationwide are hurrying to complete "Crisis Standards of Care" plans to guide medical professionals in such catastrophes and determine what should trigger them. (AP Photo/Jim Mone)
US

At the prodding of the federal government, state health departments nationwide are hurrying to complete “Crisis Standards of Care” plans to guide medical professionals in such catastrophes and determine what should trigger them. It’s no easy task: Plan architects must navigate the ethical and legal minefields that would arise if there are more patients than providers at hospitals, clinics and other medical settings are set up to handle in usual fashion.

“When they are facing these decisions the last thing you want to do is make it up as you go along,” said Dr. John Hick, an emergency physician at Hennepin County Medical Center in Minneapolis and a national expert in disaster planning. “Don’t leave this on the shoulders of the caregiver at the bedside.”

Major emergency response planning isn’t new, but this process is focused on catastrophic events that would go beyond the ability of individual hospital systems to manage.

The Ebola outbreak that killed thousands in Africa and put about a dozen patients in U.S. hospitals focused new attention on the wider health system’s readiness to handle something so dramatic. Closer to home, the examples used are Hurricane Katrina and the deadly 2011 tornado in Joplin, Missouri.

Once a disaster like those imagined by the planners is designated a crisis by a state official or a panel, care would shift from focusing on individual patients to sharing “limited resources” so that there are “best possible health outcomes for the population as a whole,” as described by the Institute of Medicine, a national advisory body. That could mean people without acute conditions are denied hospital admission, scarce antiviral medicine is distributed more selectively, medical equipment is substituted with other devices and people judged unlikely to survive don’t get typical interventions.

Such trade-offs are unimaginable to some in modern medicine, according to Judy Marchetti, an emergency preparedness manager helping write the Minnesota Department of Health’s plan.

“Five people need a ventilator and you have one ventilator, do you reallocate it or is it first-come, first-serve?” Marchetti said.

But some doctors consider the conversation misguided, find the terminology about differing standards worrisome and chafe at the idea that physicians would need special instructions to handle calamities the right way.

Dr. Carl Schultz, director of the Center for Disaster Medical Services at the University of California at Irvine, sees it as a move to shield providers from liability for actions during disasterseven if the prospect of being successfully sued is small.

“Bad medical care is worse than no medical care at all,” Schultz said, adding, “Even disaster victims can be mismanaged. Just because it is a disaster does not mean you throw out any responsibility.”

At the request of federal agencies, the Institute of Medicine developed a framework to guide states in making their plans. Federal money tied to the effort sets a mid-2017 deadline for completion.

Arizona completed its 148-page plan in February. Andrew Lawless, who led the project for the Department of Health Services, said it was tough to create a plan that meshes with ones that hospitals and emergency managers already have in place for care surges. Lawless’ team held an exercise in May to hunt for gaps that might be addressed in a possible update.

“We asked our stakeholders to come in and try to kick holes in the plan,” Lawless said.

Other states aren’t even at that point.

Minnesota’s health agency expects to hire a special facilitator soon and wants to have a version by December.

Texas got going in June 2013 and originally set a Jan. 31 deadline, but that won’t be met. The Department of State Health Services is examining “the best way to move forward considering the size, scope and diversity of the state,” said spokeswoman Christine Mann.

Kentucky also has slowed its planning, citing in part a drop-off in 2014 in federal funding for the project.

“We recognize the importance of Crisis Standards of Care plans in a health emergency,” said Dr. Kraig Humbaugh, senior deputy commissioner at the Department of Public Health. Until a statewide plan comes together, he said the agency “has developed a template that hospitals can use to formulate their own plans.”

Hick said the public should be comforted that discussions of worst-case scenarios are occurring. But, he acknowledged, “it’s time-consuming planning for an event that may not happen.”