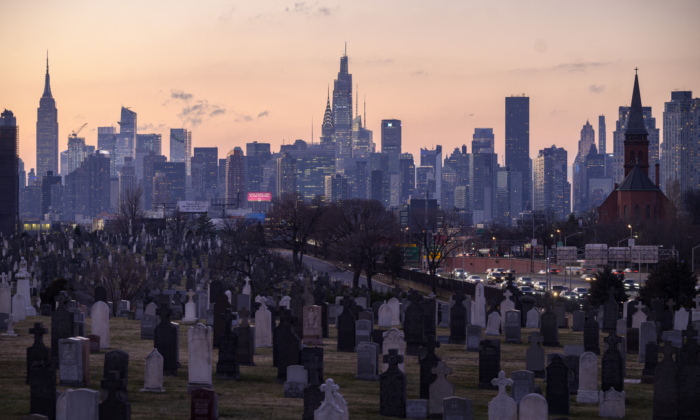 A general view shows landmark buildings of the Manhattan skyline rising behind the Calvary Cemetery in the Queens borough of New York on January 25, 2022. (ED JONES/AFP via Getty Images)
Policies & Impacts

More than $5.7 trillion in federal money has been authorized for allocation under five pandemic stimulus packages approved by Congress between March 2020 and March 2021 with assistance awarded to a diverse mix of recipients ranging from individuals, small businesses, corporations, nonprofits, foundations, contractors, and governments of all shapes and sizes.

But when the first of the five aid packages, the $2.2 trillion Coronavirus Aid, Relief and Economic Security Act (CARES) Act, was adopted in March 2020, the sudden, massive avalanche of federal aid overwhelmed existing public-private funding sluiceways and federal grant pipelines.

That crush of money created bottlenecks, costly inefficiencies, and “cronyism and corporate welfare,” critics allege. Federal oversight panels and other watchdogs, however, say lessons learned from problems that surfaced in CARES Act allocations can install efficiencies and standards benefiting taxpayers in the future.

According to a trove of analyses confirmed in recent reports by the U.S. Government Accountability Office (GAO) and U.S. Office of the Inspector General (OIG), CARES Act allocations in 2020 were skewered by belated, blurry federal guidance, economic upheaval, hampered government operations, disruption in legislative sessions and a timeline that induced “use-it-or-lose-it” spending sprees, fostering delays in distributing assistance and currying uncertainties over federal “claw backs” of money spent before final rules were set, concerns that still linger for many state and local governments.

But the biggest obstacle that hamstrung swift, targeted allocation was the sheer suddenness, size, and nebulous scope of the CARES Act.

University of Illinois-Chicago (UIC) Government Finance Research Center Associate Director Amanda Kass co-authored a fall 2020 report documenting how “changing guidelines from the U.S. Treasury Department led to confusion,” but that the crush of federal money swamped capacity to process and allocate CARES Act money as quickly as intended by Congress.

“We were digging into this not so much about programs or policy but about distribution. We were curious to see the rollout of new plans. Something that really jumped out at me is that there was a lot of infrastructure that needed to be put in place—accounting, dispersal, oversight, reporting times,” she said. “There were technical questions having to do with accounting, accountability, finance, and cash flow. It was flying the plane while you’re building it.”

This was especially an issue for allocations from the CARES Act’s Coronavirus Relief Fund (CRF), which set aside $150 billion for state, local, and tribal governments. The money was authorized by Congress for federal agencies to allocate but state and local agencies didn’t have the capacity to distribute it all, nor the explicit authorization to disperse some CRF components because guidance was a work-in-progress.

“There is a real problem when local governments cannot spend all the money that Congress is throwing at them,” OpenTheBooks.com Founder/CEO Adam Andrzejewski said.

Months earlier, state and local governments were lobbying for a CRF extension with analysts warning the compressed deadline was creating an environment for wasteful decisions in a “use it or lose it” flurry before the deadline expired.

“Changing guidelines from the Treasury Department have led to confusion and spending delays,” Kass found in her study months earlier. “The Dec. 30 date is arbitrary.”

“I think at a very high level, the process was certainly a challenging one for states. The decision-makers [legislators] who would normally weigh in on this were not able to convene because of public health concerns in many states,” National Association of State Budget Officers (NASBO) Director of Budget Process Studies Kathryn Vesey White said. “That is just scratching the surface” of the issues facing downstream county and municipal government budget managers.

The CRF allocation structure also contributed to the slow-roll of money downhill. States and municipalities with populations above 500,000 received direct CRF allocations from Treasury while those with less received CRF monies through the state.

Treasury distributed CRF monies to the 50 states and 154 counties/cities, accounting for $139 billion of the $150 billion, according to the OIG’s Pandemic Response Accountability Committee’s (PRAC) CRF webpage.

Problem is, there are nearly 40,000 general-purpose governments in the United States, including 3,006 counties and more than 30,000 cities. Although CRF was intended to be passed along to counties and cities, there was no requirement for states to do so or guidance in how, National Association of Counties (NACo) Deputy Director of Government Affairs Eryn Hurley said.

So many states sat on it. And in some states, releasing CRF monies for local governments became embroiled in red legislature versus blue city politics.

Florida, for instance, received $8.3 billion in CRF with $2.473 billion allocated directly to its 12 largest counties. Of the remaining $5.8 billion, $1.27 billion in CRF was earmarked for Florida’s 55 small/mid-sized counties.

Gov. Ron DeSantis did not release the last $700 million of that $1.27 billion in CRF monies to the counties until late fall 2020.

“CRF was, of course, provided in spring 2020 when the pandemic was new and the crisis was immediate and the need was for funding to respond to that crisis. The need was immediate” because counties are primarily responsible for administering public health programs, Hurley said.

Another frustration was local governments “couldn’t use (CRF) funds for revenue loss which, of course, counties experienced—they experienced a $202 billion budgetary shortfall over the last two years,” she said.

The CARES Act was the first of five federal COVID-19 assistance packages culminating in the March 2021 adoption of the $1.9 trillion American Rescue Plan Act (ARPA), which includes a $350 billion Coronavirus State and Local Fiscal Recovery Fund (SLFRF) that allows local governments some discretion in addressing revenue losses from 2020 and with expenditure deadlines extending through 2026.

ARPA’s far larger $350 billion SLFRF includes far more potential for wasteful spending unless lessons learned from the $150 billion CRF allocation are incorporated into what is now a far more proficient—maybe too proficient—system for processing and allocating federal funds, government watchdogs and critics agree.

On Jan. 27, the GAO issued a “lessons learned” report to nine Congressional committees that identify needs for “clear and timely guidance,” up-front “agreements with terms and conditions” and “performance measures” that balance “data reporting & transparency and recipient burden” in not repeating CRF mistakes with SJFRF allocations.

The GAO report essentially confirms a “lessons to learn” analysis” issued by Americans For Prosperity (AFP) a month after the CARES Act was adopted.

AFP, a Virginia-based free-market advocacy nonprofit funded by Koch Industries, said the unprecedented size, scope, and speed in which Congress adopted the CARES Act without clear guidance and oversight resulted in CRF monies being spent on “pet projects … cronyism and corporate welfare” and was larded with “giveaways to politically favored special interests.”

AFP said it would be “instructive to review aspects of the CARES legislation so that future responses don’t repeat the wasteful, abusive and inappropriate elements of the act.”

NASBO’s Vesey White said the accordion-like compression and 11th-hour extension of the CRF deadline, exacerbated by piecemeal federal guidance, created an environment for “use it or lose it” bad decision-making.

With ARPA’s varied deadlines set across multiple years, there is more time to make better decisions, she said.

“There is an element of truth to that,” Vesey White said. “They have a longer time horizon for it to be spent, so states and local recipients are able to deliberate, collaborate across different stakeholder groups in a more deliberative fashion because they have more time. The funds are meant to respond to and support not just urgent needs, but to foster a longer-term recovery.”