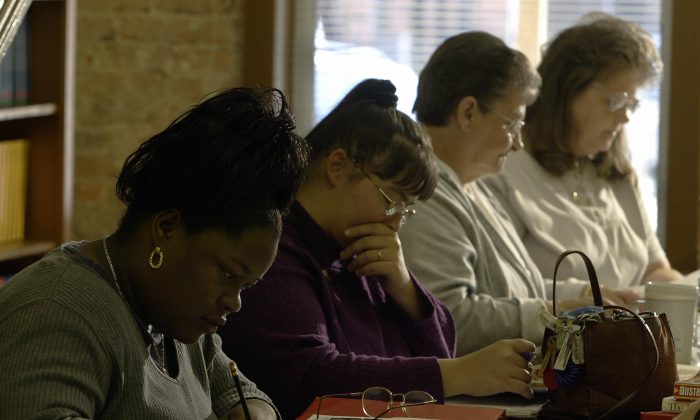 Eela Cox, (L),33, studies world geography at the Adult Basic Education office in Lumberton, North Carolina, in this file photo with other women who brushing up on basics to enable them to get their GED or High School diploma. States across the country are developing alternatives to the GED. (Paul J. Richards/AFP/Getty Images)
US

States Drop GED: Alternatives to the test, which enables people to earn the equivalent of a high school degree, are being developed in states across the U.S.

About half of the states in the U.S. are considering or have already decided to replace the GED high school equivalency test, because an update in 2014 will drive costs up and be entirely digital.

New York is one of the states that has already decided to replace the GED, which enables people to earn the equivalent of a high school degree. Officials with the state partnered with CTB/McGraw-Hill of Monterey, Calif. to develop a new test.

The alternative being developed in New York, dubbed the Test Assessing Secondary Completion (TASC), will cost $54, and will gradually phase in digital tests over three years.

This addresses the two problems with the new GED tests being developed—a leap in cost per test, from $60 to $120, and an immediate switch from pencil and paper to computer tests.

“While the GED was run by a not-for-profit, the system worked fairly well,” said Regents Chancellor Merryl H. Tisch in a written statement. “But a Pearson GED monopoly would put our students at the mercy of Pearson’s pricing. We can’t let price deny anyone the opportunity for success.”

Pearson Inc. partnered with the American Council on Education to form the new GED.

Montana and New Hampshire officials joined New York in announcing they were switching to a new high school equivalency exam. California officials began looking into amending regulations to drop the requirement that the state only use the GED test. Missouri has requested bids from test makers and plans to make a decision this month. Several others states, including Massachusetts, Maine, Indiana and Iowa, are making plans to request information about alternative exams.

Tennessee and New Jersey are exploring offering more than one test.

“The national situation is definitely fluid,” said Tom Robbins, Missouri’s director of adult education and high school equivalency, noting that other states plan to use the GED for now and bid later.

The cost leap alone has driven many states to act. Most subsidize the GED—in Connecticut, it costs $13 for a person to take the GED, but the actual price of the exam is about $60.

“It is going to be prohibitive,” state Rep. Toni Walker told NPR. “People come here with pennies and nickels, bringing us change to pay for their GED. So it’s going to be a class issue. People who have no money will never be able to actually take the GED.”

And the digital divide will be a problem to overcome as well, as even GED alternatives are moving to be computer-based, but with a phase in period.

Walker, for instance, said that fewer than 20 percent of the students studying for and taking the GED have computers at home.

“So if we don’t show them how to use a computer, they’re never going to be able to pass the GED, because they won’t be able to do it online,” she said.

One program participant, Nicole Williams, a 21-year-old Kansas City mother of three, said she was hopeful she’d pass the GED test soon so she could avoid the electronic version. With it, she said, “you’ve got to learn how to type, use the computer, plus your GED. That’s three things instead of just trying to focus all on your GED test.”

Developers say the new version is needed because nearly all states are adopting tougher math and reading standards to ensure students are prepared for college and careers. Because the new version is so different, a million or so adults who have passed some but not all of the five parts of the current GED test must complete the missing sections by Dec. 31. If not, their scores will expire and they’ll have to begin again under the new program Jan. 1.

“The GED was in dangerous position of no longer being a reflection of what high schools were graduating,” said Randy Trask, president and CEO of GED Testing Service, which previously was solely operated by the nonprofit American Council on Education.

He said the computerized version, which students are passing at higher rates than the paper version in pilot sites, will be cheaper to administer because states will no longer have to pick up the tab for things like grading the exam. For test-takers who fail a section, the computerized version provides details about what skills they need to work on before retaking the exam.

“I personally went into it a little bit naively,” Trask said of the new version. “I don’t know why I expected a marching band, but I did because I’m convinced that what we are doing is the right thing for the adults in this country.”