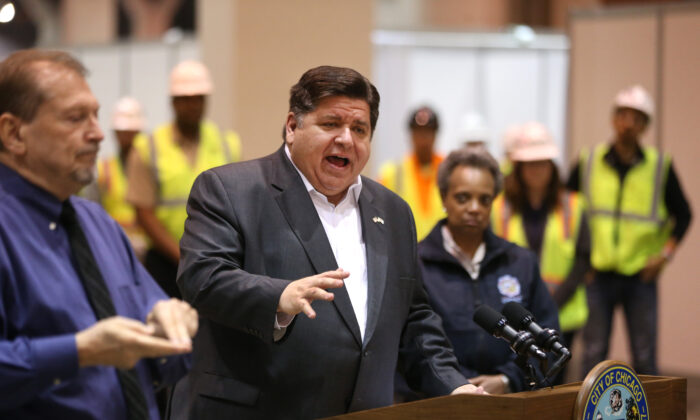 Illinois Gov. J.B. Pritzker (C) speaks during a press conference in Chicago on April 3, 2020. Out of the 50 states, Illinois ranks 49 in financial health. (Chris Sweda-Pool via Getty Images)
By Mark Tapscott

When Illinois legislators approved a $42.8 billion budget for the coming year during an emergency session over the Memorial Day weekend, official revenue projections were only for $36.8 billion.

Lawmakers weren’t worried about the resulting deficit, however, because they assumed the state would borrow at least $5 billion to close the revenue gap.

The biggest single chunk of the requested bailout was the $15 billion that Harmon said was needed “to stabilize the state budget.” Harmon’s Democratic colleagues outnumber Republicans, 40–19. Illinois Gov. J.B. Pritzker is a Democrat, and Democrats control the state House of Representatives, 74–44.

Speaker of the House Nancy Pelosi (D-Calif.) was happy to oblige the bailout demands by including nearly $1 trillion in such funds in her $3 trillion Health and Economic Recovery Omnibus Emergency Solutions (HEROES) Act, which was narrowly passed by her chamber by a 208–199 vote on May 15.

Between them, California, Illinois, and New York stand to receive more than $104 billion from federal taxpayers if Pelosi’s bill is approved as is by the Senate and signed into law by President Donald Trump.

But Trump opposes federal bailouts for poorly managed states, telling the New York Post recently, “You look at Illinois, you look at New York, look at California, you know, those three, there’s tremendous debt there, and many others.”

Trump praised Florida, Texas, and “the Midwest” for having “very little debt,” adding, “I don’t think the Republicans want to be in a position where they bail out states that are, that have been mismanaged over a long period of time.”

The bailouts are necessary, top officials in all three states say, because of the CCP virus pandemic that prompted the nationwide lockdown beginning March 15. State health care and unemployment benefits costs have skyrocketed, while tax revenues plummeted.

But an in-depth look at state and federal data shows there are at least five other factors in the deep-blue trio’s budget woes than the CCP virus’s impact.

The first factor is these states is have long been one-party “trifectas” for Democrats. Besides California’s Newsom, the California Senate has a 29–11 Democratic majority and the state Assembly is dominated by Democrats, 62–18.

It’s been nine years since California’s last Republican governor, Arnold Schwarzenegger, left office. And the last time Republicans controlled at least one legislative chamber was 1994, when the GOP had a one-vote state Senate majority.

Similarly, New York’s last Republican governor, George Pataki, left office in 2006. Republicans have controlled the state Senate four sessions since 2008, but only by razor-thin margins and in two of those sessions only through coalitions with minority parties. Democrats have dominated the state assembly every session since 1994.

Ditto for Illinois, home of Chicago and its infamous Daley Machine. The last GOP governor was Bruce Rauner, who lost a 2018 reelection bid. Democrats have controlled the statehouse every session since 1996, while the state Senate has had Democratic majorities every session since 2002.

“They only have six budgeted funds, but 600 actually exist,” Weinberg said. “For example, on everybody’s phone bill, there is a ‘911 Illinois Enhancement Fee,’ which is supposed to be for 911 enhancement. But if they are short in the general fund, they just steal the money from that special fund.”

The second factor is that all three states’ public employee workforces are highly unionized, led by New York (65.5 percent), California (52.6 percent), and Illinois (45.8 percent), according to TIA’s Data-Z, which allows comparisons of all 50 states on hundreds of factors, based on official statistics.

“Correlation is not causation,” TIA Director of Research Bill Bergman told The Epoch Times. “But in general, looking across the 50 states, indicators suggest that special interest groups that are stronger in one state than another tend to be associated with poorer financial conditions.”

The decades-long strangleholds on public policy of Democratic majorities and strong public-sector unions are associated with the third, fourth, and fifth common results in the three states, according to Bergman, including overly generous state employee salaries, lavish but severely underfunded pensions, and failing financial ratings and business climates.

In California, more than 340,000 public employees and retirees are paid $100,000 or more annually, according to Adam Andrzejewski, founder and president of openthebooks.com.

Among examples Andrzejewski found was a state university nurse being paid $501,391 per year, a correctional system psychiatrist receiving $409,399 annually, and the state’s chief barbering and cosmetology regular taking home $124,296.

The most recent edition of TIA’s Financial Condition of the States highlights the fourth factor, the sorry overall financial conditions of the three states.

Finally, California, Illinois, and New York show poorly in multiple independent rankings, based on factors such as how hospitable they are to small business, which creates most new jobs in America and generates new tax revenues.

In the Tax Foundation’s annual rating of the favorability for business of each state’s tax policies, New York (49), California (48), and Illinois (35) are again in the bottom tier.

In Chief Executive Magazine’s annual rating of business climates, California (50), New York (49), and Illinois (48) literally bring up the rear among the 50 states.