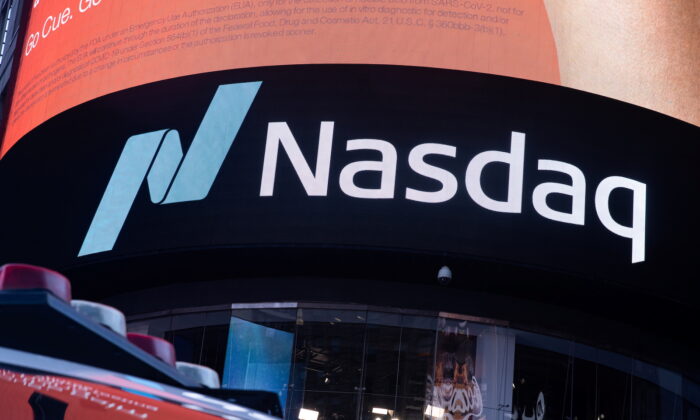 The Nasdaq logo is displayed at the Nasdaq Market site in Times Square in New York City, on Dec. 3, 2021. (Jeenah Moon/Reuters)
Big Tech, Censorship, and Socialism

A coalition of 17 Republican-led states filed an amicus brief in support of a challenge against Nasdaq Inc. for a set of diversity rules for corporate boards of directors that were approved by the Securities and Exchange Commission (SEC) last August.

The amicus brief (pdf), which was filed by Arizona, Alabama, and other 15 red states in the U.S. Court of Appeals for the 5th Circuit on Dec. 27, includes a litany of alleged abuses, including violations of the equal protection clause of the Constitution, infractions against traditional state jurisdictions, and an overreach of the SEC’s authority.

The challenge is led by the Alliance for Fair Board Recruitment (AFFBR), an organization dedicated to “promoting[ing] the recruitment of corporate board members without regard to race, ethnicity, sex, and sexual identity.” The organization previously challenged similar laws passed by California in 2018 and 2020.

The rules in dispute require all companies traded on the Nasdaq stock market to report demographic data on the constitution of their boards of directors, including gender identity, racial background, and sexuality. The rules would require every board of directors to contain at least two “diverse directors,” including “at least one director who self-identifies as female and at least one director who self-identifies as an Underrepresented Minority or LGBTQ+,” or to provide a satisfactory explanation for why the company lacks directorial representation from these groups.

Failure to report data or to uphold the rule’s diversity expectations could result in the delisting of the company from Nasdaq, effectively barring the company from the world’s second-largest stock exchange.

“[The SEC] has blessed explicit race-based requirements for listed corporations, and further threw in overt sex-based and sexual-orientation-based mandates to boot. And the type of preference it adopted is particularly pernicious: outright quotas rather than any sort of ‘plus factor,'” reads the objection from the 17 states.

“None of this is remotely lawful, and SEC has transgressed both constitutional and statutory limitations on its authority. Indeed, SEC’s Quota Rule ‘amount[s] to outright racial balancing, which is patently unconstitutional.'”

The diversity requirements targeted by the new filing were approved last August by the SEC, and the warm reception they have received from that agency is consistent with the Biden administration’s initiatives to promote progressive notions of equity in the workplace.

These rules reflect calls from investors for greater transparency about the people who lead public companies, and a broad cross-section of commenters supported the proposed board diversity disclosure rule,” SEC Chairman Gary Gensler, who was appointed by President Joe Biden earlier this year, said in a statement in August.

AFFBR President Edward Blum told The Epoch Times in an emailed statement, “The members of the Alliance for Fair Board Recruitment are grateful that the attorneys general of seventeen states recognize Nasdaq’s unfair and unconstitutional board quotas.

“It is our hope that the judges hearing this case will agree and end these polarizing requirements.”

The SEC didn’t respond to The Epoch Times’ request for comment by press time. Nasdaq declined to comment at this time.