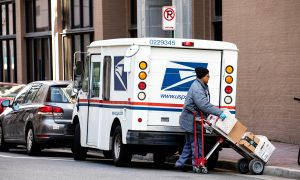 Schumer: McConnell Must Bring Senate Back Early If USPS Bill Is Passed
0 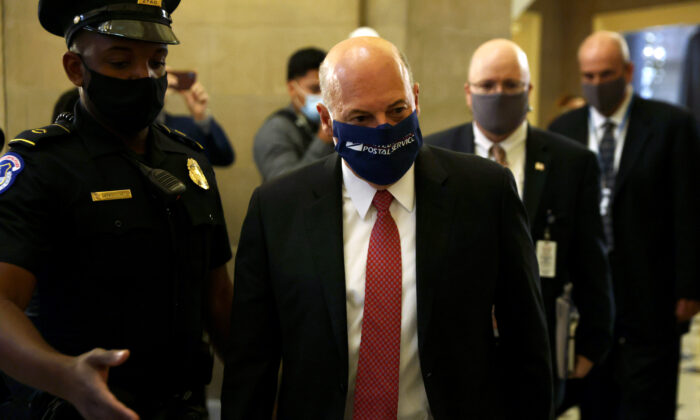 Postmaster General Louis DeJoy arrives at a meeting at the office of Speaker of the House Rep. Nancy Pelosi (D-Calif.) at the U.S. Capitol in Washington, on Aug. 5, 2020. (Alex Wong/Getty Images)
2020 Election

Two coalitions of states said on Tuesday they will file separate lawsuits against the Trump administration to challenge recent operational changes within the U.S. Postal Service (USPS) aimed at helping the agency reduce costs.

The announcements came around the same time Postmaster General Louis DeJoy said that USPS would suspend all operational changes until after the election in order to “avoid even the appearance of any impact on election mail.”

The office of Pennsylvania Attorney General Josh Shapiro, who is leading one of the multi-state lawsuits, told The Epoch Times in an emailed statement that DeJoy’s announcement does not address the “operational changes put in place in July” and will continue to proceed with their case.

“We need more than a statement, we need binding agreements. The Postmaster General’s statement, while positive, does not address the operational changes put in place in July at the heart of our lawsuit. Therefore, we’ll continue to press our case through the legal process and hold DeJoy accountable going forward beyond the election,” Shapiro’s office said.

Massachusetts Attorney General Maura Healey, who joined Shapiro’s lawsuit, also told The Epoch Times that the lawsuit will go ahead in order to seek “concrete action and binding agreements” from DeJoy.

“This isn’t the first time the Trump administration has backed down when Democratic AGs have filed suit. But we aren’t going to just take Postmaster General DeJoy at his word—we need concrete action and binding agreements. With no indication of that, we are moving forward with our lawsuit to hold the Trump administration accountable for its illegal actions and to make sure every vote counts,” Healey said in the statement.

Shapiro’s lawsuit seeks to reinstate operations at the Postal Service prior to the implementation of recent changes deemed to impact the ability of USPS to make deliveries on time, according to a news release. The states claim that DeJoy’s changes have resulted in delays in postal delivery for Americans. In Pennsylvania, residents have been experiencing delays in receiving their mail, often with days without the delivery of letters, paychecks, or bills, the attorney general claims.

“With this imminent filing, we are putting the Administration on notice: immediately roll back these operational changes at the US Postal Service and allow postal workers carry out their vital mission without interference—or lose to us in court,” Shapiro said in the statement.

Pennsylvania was one of the states that received a letter from the Postal Service notifying it that USPS could not guarantee delivery of ballots in accordance with state laws and deadlines.

Meanwhile, DeJoy announced on Aug. 7 sweeping changes to the leadership structure of the organization, as part of efforts “to operate in a more efficient and effective manner and better serve customers” amid concerns over the financial position of the agency.

This announcement drew intense scrutiny to the agency, with lawmakers and critics alleging that DeJoy’s decision to restructure the national postal service just months prior to the November election is designed to limit mail-in voting.

These changes also come amid President Donald Trump’s opposition to mail-in ballots. He has repeatedly argued that universal mail-in voting is ripe for fraud.

Pennsylvania will be joined by California, Delaware, Maine, Massachusetts, and North Carolina in this lawsuit.

The second lawsuit, led by Washington State Attorney General Bob Ferguson, will also be filed on Tuesday, according to a news release. The Washington State attorney general office told The Epoch Times in an email that their lawsuit will go forward.

Ferguson’s lawsuit alleged that DeJoy’s operational changes would “threaten critical mail delivery and could undermine the national election in November.”

“We rely on the Postal Service for our Social Security benefits, prescriptions—and exercising our right to vote. Our coalition will fight to protect the Postal Service and uphold the rule of law in federal court,” he said in the news release.

Both lawsuits will argue that DeJoy had acted outside his authority to implement changes to the postal system, and did not follow the proper procedures under federal law. The states say USPS must submit planned changes that could cause a nationwide impact in mail service to the Postal Regulatory Commission. This commission would then evaluate the proposals through a procedure that includes public notice and comment.

DeJoy is set to testify at a House Oversight Committee hearing next week, House lawmakers confirmed on Aug. 17.

Officials at the USPS didn’t immediately respond to request by The Epoch Times for comment.

The article has been updated to include Washington State attorney general office’s comment about the status of their lawsuit.