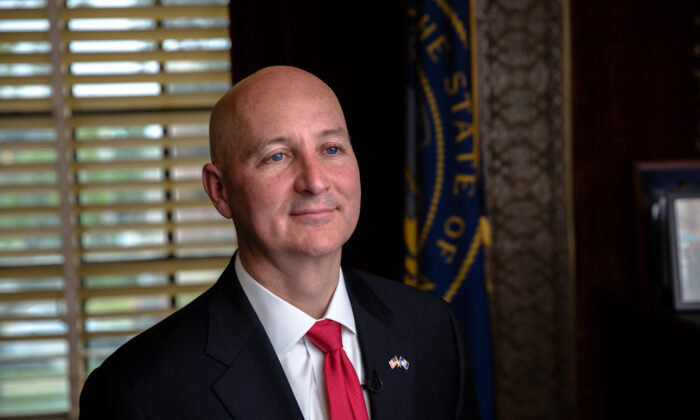 “He’s coordinating with the other attorneys general across the country who share similar views about the overreach,” Nebraska Gov. Pete Ricketts said on “Fox News Sunday.”

“This is an egregious overreach of federal authority. And as we see what these rules are, we will be able to know exactly how we will be able to challenge them in court. I’m also talking with my colleagues around the country as well, the other governors who feel the way I do, and we’ll be working on other strategies,” he added.

Biden is, through an executive order released last week, forcing federal workers to get a COVID-19 vaccine unless they are approved for a religious or medical exemption. He’s also directed the Occupational Safety and Health Administration (OSHA) to work up an order that would require private businesses with 100 or more employees to mandate vaccination.

Ricketts, a Republican, and 18 other governors immediately condemned the mandates, arguing they were the wrong approach to increase the uptake of COVID-19 vaccines. Some governors and attorneys general indicated that they would turn to the courts.

“I will pursue every legal option available to the state of Georgia to stop this blatantly unlawful overreach by the Biden administration,” Gov. Brian Kemp, a Republican, wrote on social media in the wake of Biden’s announcement.

Ricketts, asked when he would be going to court, said that would come when the exact rules are laid out.

“When we get an idea of what these rules exactly will be, we’ll know how to be able to attack it in court,” he said.

Biden administration officials have defended the mandates, asserting that they’re legal and would withstand scrutiny.

“The law basically requires the Department of Labor to take action when it finds grave risk to workers,” White House press secretary Jen Psaki told reporters on Friday. “And, certainly, a pandemic that killed more than 600,000 people qualifies as a grave risk to workers.”

“The requirements that he announced are not sweeping requirements for the entire nation. These are focused on areas where the federal government has legal authority to act,” added Surgeon General Vivik Murthy on ABC’s “This Week” on Sunday.

Mandates of the kind Biden announced are “generally relegated to the legislature in our system of government, so I think the courts will focus on that issue first and say that the president may not have the authority to do this without congressional authorization,” Alan Dershowitz, a Harvard Law School professor, said over the weekend.

That’s what happened with the eviction moratorium ordered by the Centers for Disease Control and Prevention. The Supreme Court blocked the latest moratorium last month, ruling the agency lacked the authority to impose such a ban and that Congress had not authorized it.

“We expect Congress to speak clearly when authorizing an agency to exercise powers of ‘vast economic and political significance,'” the majority wrote.