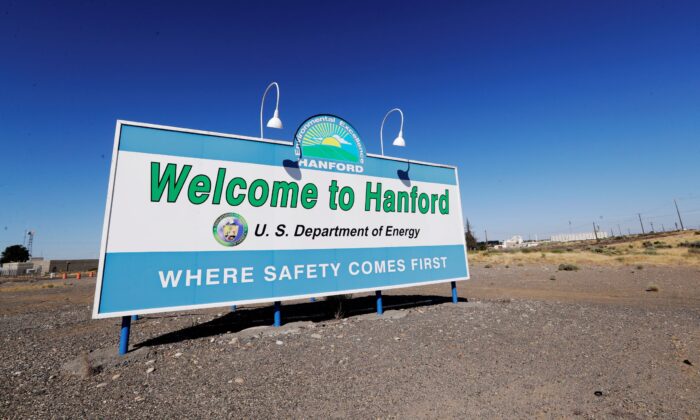 A sign at the Hanford Nuclear Reservation is posted near Richland, Wash., on Aug. 13, 2019. (Elaine Thompson/AP Photo File)
Judiciary

The case could have expensive consequences for U.S. government contracts related to hazardous work conducted on federal property. The Biden administration argues that the state law impermissibly intrudes on federal authority. Washington state counters that the case is moot because a new state law replaced the old one.

The case is United States v. Washington, court file 21-404, an appeal from the U.S. Court of Appeals for the 9th Circuit. The Supreme Court agreed Jan. 10 to hear the case.

The constitutional doctrine known as intergovernmental immunity prevents states from taxing or regulating property or operations of the U.S. government, but Congress may waive this immunity. In 1936, a federal law waived federal immunity in connection with state workers’ compensation laws on federal land after the Supreme Court ruled states could not apply their workers’ compensation laws to federal facilities. The objective was to make sure non-federal workers involved in federal work would not be left without workers’ compensation coverage, in which case their only option for redress might be launching a civil tort action if they suffered a workplace injury or disease, according to a SCOTUSblog summary.

Workers’ compensation laws and regulations give employees regular cash benefits and reimbursement for medical treatment for diseases and injuries experienced while working. “Diseases have historically been very difficult to cover under workers’ compensation because of causation requirements. Many diseases may have both work and non-work causes,” a distinction U.S. v. Washington contemplates, the summary states.

The dispute in the case at hand is about whether the federal government has to continue paying the workers’ compensation claims of specific employees working for private federal contractors.

Since 1989, the U.S. Department of Energy has been overseeing a cleanup at the Hanford Site, a 600-square-mile site along Washington’s Columbia River that made weapons-grade plutonium for the Manhattan Project, the nation’s nuclear program during World War II and the Cold War. The remediation is expected to stretch over the approaching six decades and involve around 400 department employees, along with another 10,000 contractors and subcontractors.

These workers are at high risk of suffering diseases caused by workplace exposure to radioactivity and other toxins at the site.

In 2018, Washington state enacted HB 1723, which created a legal presumption that some medical conditions affecting workers involved in remediation efforts at the Hanford Site are occupation-related diseases that can lead to workers’ compensation benefits. The law was passed after reports emerged that workers in Hanford had become sickened but were denied workers’ compensation benefits because they were federal contractors.

In what appears to have been an effort to placate federal authorities, in March of this year the Washington state legislature expanded the presumption so that it applied to all employees at all radiological waste sites in the Evergreen State. Democrat Gov. Jay Inslee signed the bill, SB 5890, on March 11 and the state then took the position that the case before the Supreme Court had become moot.

But, Stewart added, “under this court’s precedents … the case is not moot so long as there is a reasonable possibility that such a benefit will ensue.”

Justice Sonia Sotomayor told Stewart he enjoys “a presumption in [his] favor, the presumption that a waiver has to clearly and unambiguously waive governmental immunity.”

She added: “As my colleagues have pointed out, the language here is a waiver of immunity, but there is some ambiguity as to what the extent of that waiver is.”

Justice Elena Kagan told Stewart that he had “very strong arguments about the impetus of the law,” but “if you look at the text here, I’m struggling to read it your way.”

Washington Deputy Solicitor General Tera Heintz told the justices the appeal should be thrown out on mootness grounds.

“To protect workers on federal projects like the Hanford cleanup, Congress passed a waiver statute that allows states to regulate federal contractors using all the same tools we can use as to any private actor,” Heintz said.

The waiver allowed the state to enact HB 1723, which no longer exists because SB 5890 replaced it, she said.

“The federal government is asking you to issue a constitutional ruling invalidating a state law that no longer exists and that has no ongoing effect,” Heintz said.