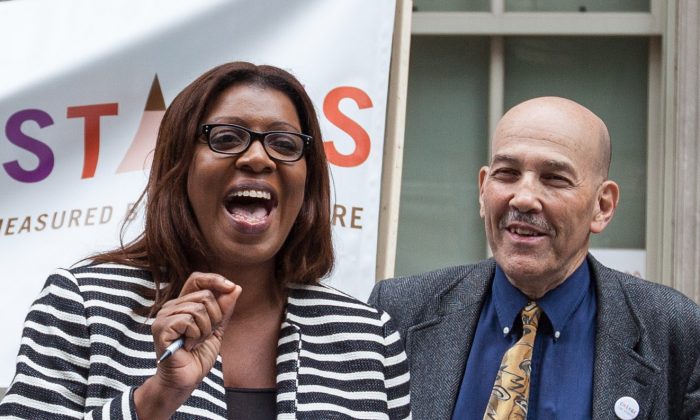 NEW YORK—When New York State Education Department ordered new standardized tests from Pearson publishing company in 2011, they struck an ingenious idea to save money—why not use school children as free labor to do research for the tests?

Since 2012, every year more than 1,000 schools are picked to complete so-called field tests in English or math. The only purpose is to provide research data for Pearson to prepare tests for the next year.

This doesn’t sit well with some parent advocates and now the city’s Public Advocate Letitia James has lent her voice to their cause as well.

“This is yet another test that takes teachers away from providing needed instructional time in the classroom,” James said during a Wednesday press conference on the matter on the steps of the Education Department headquarters in downtown Manhattan.

The usual practice is to mix field testing with the real test. Some questions wouldn’t be graded and would be used just for research. Pearson uses this method as well, but doesn’t mix in enough try-out questions, hence the need for a stand-alone field test.

The main problem is Pearson doesn’t develop enough questions every year, according to Fred Smith, former test specialist for the city’s Education Department and a speaker at the press conference. For the same reason the state only releases 25 percent of the previous year’s test questions, as many have to be reused the next year.

Pearson is paid $32 million in a five-year contract to develop the tests. State Education Commissioner John B. King Jr. said it would cost $8.4 million more to produce enough test questions so that all of them can be released every year. That should also be enough to do away with the stand-alone field tests. The board of regents requested the money, but it didn’t make it into this year’s state budget.

But advocates argue paying the money is not optional, since forcing children to sit through yet another test just for research purposes borders on using them as slave labor. “Our students are used as free specimens,” James said.

Another problem is reliability. “Children know the results don’t count,” James said. “They are not motivated to do well.” It doesn’t help that the field tests are administered shortly before the summer break, when students tend to loose focus on school work.

James argued that tests based on such research would be faulty, and highlighted how this year’s test quality was criticized by teachers as low quality. In a rare occurrence of organized dissent, 37 Manhattan public schools staged protests in April calling the English state test sub par.

The field tests are actually voluntary. Parents can opt their children out without any repercussions. Yet most don’t know. “Parents should be notified,” James said, pointing to “a growing number of districts that are outright refusing to give the field test.”

Though the decision lies with the state, the city plans to weigh in on the field tests as well, according to Devora Kaye, Education Department spokeswoman. “We understand the frustration among parents and educators with the frequency of testing,” she said in an email response. “This is one of many practices we plan to review this summer and evaluate for the coming school year.”