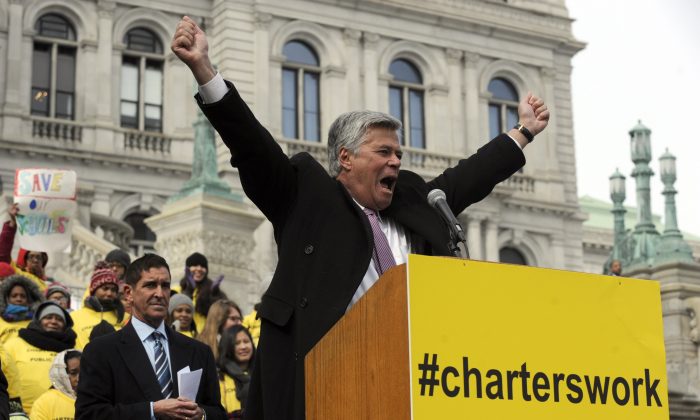 Though they lack the force of law, the one-house proposals from the state Senate and Assembly represent what the majorities want to see in the budget, which is due April 1 and is being negotiated with Gov. Andrew Cuomo.

De Blasio lobbied aggressively for an income tax increase on New York City residents who earn over $500,000 in order to fund universal pre-K and after-school expansion. But he eventually conceded and said he will support any plan that “gets the job done.”

The Republican-controlled Senate proposed $540 million for the mayor’s pre-K and after-school plan, $10 million more than what the tax was expected to yield. It also commits to fund the plan for five years, the same time de Blasio wanted the tax to last.

But the Senate included several clauses in its budget resolution, which would block de Blasio from delivering on some of his other promises.

The mayor promised that he would charge wealthy charter school operators rent for space in public school buildings. The Senate resolution requires school districts to provide the space for free.

De Blasio said that he would review the 49 school co-locations approved last year. Co-location is the practice of moving a school into a building where another school already operates. De Blasio’s administration did so two weeks ago, denying nine of them, including three for charter schools.

The resolution requires charter schools must give consent, if any co-location arrangements are to be changed, including those approved prior Jan. 1.

Charter schools need to renew their charter contract every five years. The charter can be issued by the State University of New York, the New York State Board of Regents, or the New York City Education Department. As the Education Department’s chancellor is appointed by the mayor, de Blasio may be able to influence the charter application process for charters supervised by the department.

Yet the Senate resolution gives charter schools the right to apply for a supervisor of their choice, regardless of who issued their charters.

The state Assembly passed a budget resolution Wednesday, which included the tax increase. Yet Assembly Majority Leader Sheldon Silver said Thursday he would have it the Senate way. “I’m not married to a tax,” he said.

Cuomo, who opposes the tax, will have the last word on the issue. He already said the state will give however much money the city, or other districts, may need to fund universal pre-K.

De Blasio wanted the tax increase to be dedicated to the single purpose of his plan, transcending yearly budget squabbles in Albany. The Senate addressed the concern by offering financing “through a specially designated reserve.”

De Blasio’s office released a statement Thursday saying both the Assembly and Senate resolutions “represent a new consensus sweeping across this state.”

“We will work closely with our state partners to ensure we have the sufficient, secure and ongoing resources needed to invest in the children of this city,” the statement reads.