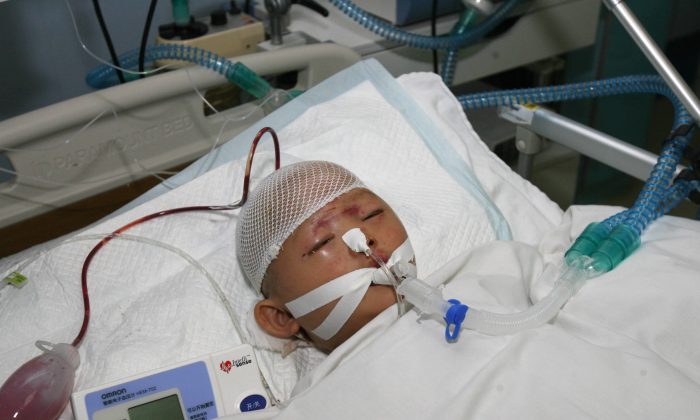 A two-year-old girl nicknamed Yue Yue is treated at a hospital in Guangzhou on Oct. 16, 2011, after being crushed by two vehicles and then ignored by 18 onlookers in the city of Foshan. The incident triggered soul searching in China about the cause of the country's moral breakdown, which was the subject of a recent official inquiry. (STR/AFP/Getty Images)
China

Critics will find confirmation of some of their most biting assessments of the Chinese regime in a recent survey done by—a Communist Party mouthpiece? The survey details the Chinese people’s lack of trust and faith in Chinese society, along with the various “abnormal mental states” the Chinese people suffer.

Most striking among these was the 13th: “Self hatred,” which was described as those who “Attack the Communist Party and hate the political system, who attack the system more ferociously the more they benefit from it.”

For the masses, who are more likely to be subject to arbitrary power than benefit from privilege, a dozen other pathologies were listed. These included “hedonism worship,” “a spectator mentality,” “ingrained suspiciousness,” “ostrich mentality,” “thinking-phobia,” “Internet reliance,” “showing off wealth,” and many more.

Survey participants were asked to rate which issues troubled them the most. The “spectator mentality,” meaning the propensity for Chinese people to merely observe others when in trouble, rather than help out, clocked in at 48.7 percent.

“Social anxiety,” meaning worrying too much about their future welfare, rated 44.5 percent. And just over 36 percent of the people enjoy scandalous things more than beautiful things, which was called the “mentality of appreciating ugliness” (shenchou xinli).

But among the most widespread issues identified in the survey was “lack of faith,” which 55.3 percent of respondents reported as the number one problem.

“Everyone acknowledges that there’s a lack of faith in Chinese society, and they see moral problems all around them,” said Yang Fenggang, the director of the Center on Religion and Chinese Society at the University of Purdue, in a telephone interview.

Survey authors said at one point that “Traditional Chinese society was based around local communities, and social groups were organized around an emphasis on virtue and faith.” But in modern society, it continued, over 88 percent of people agree that “faith is lacking, and morals are in decline,” and that this is a common “social sickness.”

Professor Yang said that Chinese people “do understand that this faith should be real faith that has the power of transcendence. It’s not for profit, not for immediate interest, it’s not about idealism—it’s faith.”

He attributed the lack of faith, as a source of moral foundation, to restrictions on religious freedom in China. “Religion, when it is freely chosen by people, provides faith to believers.”

Perhaps the most shocking example of China’s social and moral breakdown in recent years took place in 2011, when a 2-year-old, Yue Yue, was ignored by 18 passersby after being crushed under the wheels of a van, and then a pickup truck, in the streets of Foshan, Guangdong Province. The footage of people walking past the bloodied toddler, for seven minutes, stunned the country.

The survey’s reference to traditional society, in this connection, seemed suggestive. Party leader Xi Jinping recently remarked during a tour of Beijing Normal University, “The classical texts should be embedded in students’ minds, becoming the genes of the Chinese people,” according to the Jieyang Daily.

Xi has also made a point of including many Confucian and classical references in his speeches, and People’s Daily has run special pages explicating his meaning for the masses.

“Maybe this plays into one of Xi Jinping’s bigger emphases on traditional values,” said John Wagner Givens, center associate in the Asian Studies Center and adjunct professor of law at the University of Pittsburgh, in an interview.

“But I always take this idea that we’re returning to traditional values as a source of legitimacy with a grain of salt,” he added. “I got excited about that about 10 years ago when they talked about the xiaokang shehui, and I don’t think particularly much came of that.”

The phrase “xiaokang shehui” is a Confucian term that was used by former Party leader Hu Jintao to mean a “moderately prosperous” society. But the wealth gap in China, and its myriad social pressures and problems, continued to grow over the Hu tenure.

A reversion to authentic Chinese tradition, however, may not have been the antidote the survey writers had in mind in the first place, according to Cheng Xiaonong, the former editor of Modern China Studies, an academic journal.

“They mean traditional communist rule, where everyone believes what the leaders say, and propaganda can be used to manipulate and mobilize the naive masses,” Cheng said. “That’s what they want. That’s what Xi Jinping would like to see, even though it’s no longer that era or time.”

Authors of the survey do not shy away from attributing many of the problems to officialdom, in one way or another.

The widely reported social phenomenon of recent years, cited as a cause of the lack of a moral compass, mostly relate to abuses of power by officials. These include the keeping of multiple mistresses by officials, ostentatious displays of wealth, and scandals involving sex, corruption, and violence that have repeatedly emerged.

At points, the tone appeared to be directly critical of the regime itself. “Which group has the greatest crisis in its beliefs?” one question asked. Just over 57 percent of online participants answered: Communist Party officials.

Survey results were published on the website of People’s Tribune, which is part of People’s Daily, the mouthpiece of the Chinese Communist Party’s Central Committee. The survey was conducted by the “People’s Tribune Questionnaire Investigation Center,” published with an extensive introduction on its own site, and then in more popularized versions that were spread across the major Web portals.

The survey was conducted from Aug. 22 to Sept. 2 this year; a total of 8,015 people were surveyed, 70 percent online, the rest randomly selected and completing questionnaires in person.

Whether the report’s publication was meant in conjunction with any broader political push as yet remains unclear.

Yang thought it unlikely, saying, “This is a reflection of concerned intellectuals in China, worried about current social problems.”

Cheng Xiaonong suggested that, now that Party leader Xi Jinping has made progress with his anti-corruption campaign, he has “regained confidence to move forward.”

“Almost everyone in China knows that the moral basis of the Communist Party’s rule has collapsed, so the regime wants to rebuild morality—even though it’s impossible.”

Cheng added, “I guess that’s why they want a survey, and after that they might try to initiate a campaign of political education, political ideology, political loyalty, blah blah blah.”