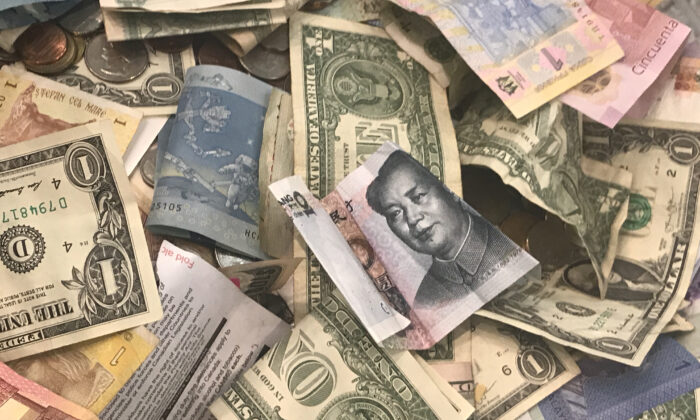 Some American institutional investors, in pushing for the highest returns, could soon find themselves hanging by their own rope while destroying the country, critics warn.

That’s because several big American money managers are investing in China through retirement funds, according to critics, who say there’s good reason for these investments to be reviewed.

“Can anyone explain to me why the Maryland State government is helping tech startups in China to compete with U.S. companies? MD pension fund invests in Chinese government-influenced VC fund,” Rob D. Atkinson, president of the Information Technology and Innovation Foundation (ITIF), wrote on Twitter recently.

The Maryland State Retirement and Pension System in a December filing with the Securities and Exchange Commission (SEC), reported that it increased its stake in Yum China Holdings Inc. “by 3.4 percent in the 3rd quarter,” according to its most recent 13F filing. The institutional investor owned 32,072 shares of the company’s stock after acquiring an additional 1,065 shares during the period.

Maryland’s retirement system’s holdings in Yum China were worth $1,897,000 at the end of the most recent quarter, the SEC reported.

Yum China Holdings operates restaurants and fast-food chains in China, including Kentucky Fried Chicken and Pizza Hut restaurants. However, several analysts have recently rated it as a sell. In November, Zacks Investment Research downgraded it from a hold to a sell. TheStreet in November dropped its rating from B to C-plus.

Michael Golden, a spokesman for the Maryland State Retirement Agency, didn’t respond to numerous phone and email requests from The Epoch Times on why the state fund is expanding its China ties.

“They’re underfunded because they’ve given in to the demands of state employees,” he said.

BlackRock, a big money manager, defends its huge investments in China. A spokesman told The Epoch Times that it’s doing what’s best for the investor.

“The assets we manage are not our own, they belong to our clients. Our obligation as an asset manager and a fiduciary is to manage those assets consistent with our clients’ objectives and choices,” the spokesman said.

But a critic of China-based investing said BlackRock isn’t acting in a fiduciary manner.

“In China, it’s illegal for foreigners to actually own shares of those companies. We question whether those returns are real, with the way that BlackRock is investing,” said William Hild, executive director of Consumers’ Research, a conservative watchdog group that has been critical of BlackRock.

Hild notes that China has no generally accepted accounting standards. He points to a July 30, 2021, statement by SEC Chairman Gary Gensler on U.S.–Chinese investments.

“To raise money on such exchanges, many China-based operating companies are structured as variable interest entities (VIEs),” Gensler wrote.

“In such an arrangement, a China-based operating company typically establishes an offshore shell company in another jurisdiction, such as the Cayman Islands, to issue stock to public shareholders. That shell company enters into service and other contracts with the China-based operating company, then issues shares on a foreign exchange, like the New York Stock Exchange.”

The shell company, Gensler said, has “no equity ownership in the China-based operating company.” He is calling for reforms in China.

“We just can’t do this anymore, because many of these companies will start competing against us,” he said. “We don’t want to start advancing the rapid development of the Chinese technological economy.

“I don’t blame Maryland for doing this, but the point is that individual rationality can lead to collective irrationality.”

Atkinson also believes that it’s “incumbent upon the federal government to ensure that any federal aid should be dependent on a state not investing in Chinese companies.”

His complaints are not just with Maryland officials. Many exchanges routinely list China-based companies. Critics contend that many Americans, unaware of the dangers, are buying their shares.

U.S. investors have put $458 billion into Chinese and Hong Kong stock exchanges and bonds, an estimated $302 billion of which is held by mutual and pension funds, according to Richard Manning, president of Americans for Limited Government. He filed these comments with the U.S. Labor Department on Dec. 13 citing Department of Defense (DOD) numbers.

This is the critical point, he said: Many investors don’t know what they’re buying.

“China did not suddenly stop controlling its state-run enterprises or using slave labor, and this is nothing more than a dereliction of duty that should not be repeated,” he said.

Read More
Exclusive: $2.3 Trillion of US Investments in China Are Dragging Down America

Hild sent a letter to the 10 governors of the states with the most pension money invested with BlackRock, asking that they reassess their relationship with China.

“These ties date back to the early 2000s and create concerning conflicts that consumers should be aware of. These ties start from the top. BlackRock’s CEO, Larry Fink, has become a trusted partner with China’s communist leadership,” Hild wrote.

BlackRock officials told The Epoch Times they disagree with these criticisms and the campaign to persuade big money managers to disinvest from China.

“As a fiduciary to our clients, BlackRock focuses on matters like diversity in the boardroom and climate risk because we believe these are material issues that can affect the long-term value of our clients’ investments,” a BlackRock spokesman said. “Those are the issues the funders and leaders of this campaign do not appear to agree with.”

Hild dismissed these arguments. He said that recently, the U.S.–China Economic and Security Review Commission, a body of security and economic experts convened by Congress, recommended that the United States curtail, not expand, economic ties with China.

In its 2021 report to Congress, the commission said that what’s at stake is the safety and security of the United States, its partners, friends, and allies.

The Chinese Communist Party, the commission wrote, “is a long-term, consequential, menacing adversary determined to end the economic and political freedoms that have served as the foundation for security and prosperity for billions of people. Each decision the United States makes over the coming months and years must be taken in consultation with concerned partners and be purposefully directed at upholding an international system that has largely served us well.”

Without the right policies, the report said, “we will continue to see the slow but certain erosion of the security, sovereignty, and identity of democratic nations.”

Hild says Americans must understand the “multiple risks posed by BlackRock’s extensive investments in Chinese companies, both from an ethical standpoint as well as the fiduciary responsibility owed to U.S. pension holders and retirees.”

The BlackRock spokesman said that by engaging with China, the money manager will encourage improved financial norms.

“BlackRock is committed to continually pushing for improved standards, governance, and accounting transparency from all companies and countries wherever they are operating in the world. Our approach to China will be no different,” the spokesman said.

Hild is unconvinced. Still, he seems to generally agree with BlackRock on one point: The debate over Chinese markets is about more than finding profitable investments.

“Investment in Chinese companies,” Hild told the governors in the letter, “could also make U.S. investors unwitting accomplices in the expansion of the Chinese Communist Party’s surveillance and intelligence gathering apparatus, or worst yet, make them party to human rights abuses like the ongoing genocide against Uyghurs in Xinjiang, China.”

Late last month, Florida Gov. Ron DeSantis announced that his state’s pension funds would no longer invest in China. He said that some American companies are apologizing to tyrants.

“If you look at how these major companies behave when faced with Chinese disapproval, they censor what the CCP tells them to censor and we see groveling apologies,” he said.

“Go back a generation, and the idea of the American elites was, ‘If we allow China into the WTO and give them most favored nation status, that will make China more like us.’ This experiment has failed, and it has endangered our nation’s national and economic security.”

However, the allure of big returns combined with underfunding pension systems still seems important. Florida officials are the only ones who have responded to the Consumers’ Research complaints and disinvested, Hild said.

Atkinson also said that many American institutional investors aren’t following Florida’s lead, but may be following the prediction of one of the most important communist leaders in history.

Vladimir Lenin, the founding leader of the Soviet Union, famously said the capitalist was so avaricious that they “will sell us the rope with which we will hang them.”

Atkinson says, “The only way you can keep a capitalist from hanging himself is to have a rule that says he can’t hang himself.”