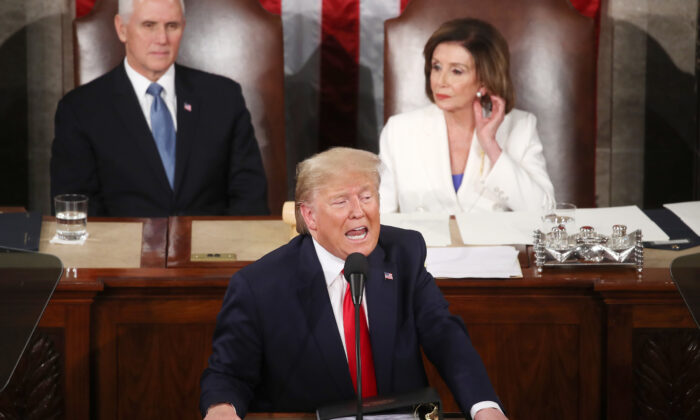 President Donald Trump delivers the State of the Union address as House Speaker Rep. Nancy Pelosi (D-Calif.) and Vice President Mike Pence look on in the chamber of the U.S. House of Representatives in Washington on Feb. 04, 2020. (Mark Wilson/Getty Images)
Viewpoints

State of the Union Reveals Bankruptcy of Democrats’ Opposition to Trump

House Speaker Nancy Pelosi’s ripping-up of the president’s State of the Union message as he left the podium is the perfect encapsulation of the rout of the Democrats.

On adjoining days, we had the fiasco of the caucuses in Iowa, where the count of a few thousand Democratic votes—which could have been done by hand in two hours—was still uncertain and incomplete a day after the caucuses finished voting, the State of the Union message, and the end of the disgraceful farce of the impeachment trial.

For the first time, the Democrats have to face President Donald Trump with no available pretext to claim his moral turpitude and notorious corruption deprive him of the right to be president. Whining like a broken washing machine, the Democrats continue to claim that the people are suffering and the 1 percent of the rich are pocketing obscene speculative gains on the stock market, while the toilers of America, especially non-whites, are grimy and downtrodden mockeries of the country club Republican oligarchy, despite the statistics that Trump emphasized.

There are more positions to fill than unemployed people, and with taxes lowered, the tax threshold raised, and almost 80 percent of illegal immigration eliminated, the fastest rising income group is the unskilled, the non-graduates of secondary school, and the lowest 10 percent of the income scale in general.

All the statistics for minorities are sharply improved, and Trump stuck to his campaign of three years ago and continued to run up the backs of the preceding administrations of both parties. Where the number of food stamp users had increased by more than 10 million under President Obama, it has declined by more than 7 million in the past three years, as 7 million net new jobs have been added, oil imports have been eliminated, and standards of living of lower-level income-earners have jolted sharply upwards for the first time in decades.

Like a mass of sleep-walkers, the Democrats have plodded on in darkness, denouncing Trump’s unspecified corruption. He was an outsider, he was outrageous. If he didn’t usurp the presidency, he at least had to be a freakish non-recurring occupant.

Everyone knew he was a crook and all that had to be done was keep repeating that in the oppressive, Trump-hating echo chamber of the national media. Then, when the monstrous fraud of the Trump-Russian collusion hoax collapsed, it was time to impeach him. The echo chamber would whip up opinion as it had with Nixon, and even if Trump wasn’t removed, his reputation would be so grievously assaulted, he would be a sitting, lame duck in the election campaign.

No probative evidence was adduced that Trump committed the acts of which he was accused, and no case was made that those acts were impeachable offenses anyway. It was just Reps. Adam Schiff (D-Calif.) and Jerry Nadler (D-N.Y.) alternately performing, with endless repetition, the fable of the serpent and the toad.

Before the U.S. Senate and a live television audience and with the chief justice of the United States presiding, Schiff said he didn’t know who the supposed whistleblower was and had nothing to do with the preparation of his complaint, assertions every informed person in the world knows to be untrue.

As the president proceeded swiftly through his lengthy recitation of the accomplishments of his administration, introduced an unprecedented number of worthy people who featured in heartwarming or heartwrenching stories, and was interrupted for applause 129 times, (all but a few by Republicans only), it emerged ever more clearly what an unenviable task awaits the Democrats.

Their unctuous morality play has come down around them like the speaker’s shredded copy of the text of the president’s remarks, reduced almost to confetti. Apart from reciting his administration’s accomplishments and introducing an array of personalities, Trump also hung around the necks of the Democrats their opposition to the barrier he is building along the southern border, their opposition to ICE (Immigration and Customs Enforcement), the support of some Democratic candidates for compulsory, government-administered medical care, their espousal of sanctuary cities, their incitement of non-compliance with the country’s immigration laws, and the Democrats’ support for unlimited medical care for illegal migrants and toleration of partial-birth and other late-term abortions.

His espousal of independent schools and prison reform would have resonated with tens of millions of voters.

There’s no longer any supposition of corruption or any integrity gap the Democrats can smugly invoke, no pending inquiry, and even the Gallup Organization, one of the most anti-Trump polls, has recorded a 10-point rise in the president’s job approval since October 2019, to 49 percent.

This indicates a real number of about 55 percent, which, when a Democratic nominee is put up as an alternative probably gives the president a 14- or 15-point lead in the popular vote, or about 22 million votes, well above the highest previous plurality, Richard Nixon’s victory in 1972 over George McGovern by 18 million votes, albeit in an electorate of only about 69 percent of the present total.

The ludicrous shambles of the Iowa vote count accentuates the impracticability of the Democratic presidential candidates.

Sen. Bernie Sanders has almost killed off Sen. Elizabeth Warren over her $52 trillion coercive health care plan and her problems with the truth (starting with the canard about being an American Indian), and a combination of the Ukraine imbroglio and Joe Biden’s own miscues seems to have caused that very tired campaign to founder.

The peculiar upstart former mayor of South Bend, Indiana, Pete Buttigieg, will vanish after the New Hampshire primary on Feb. 11. That will leave the ancient, raving, arm-waving Marxist Sanders, the unexciting but unfrightening Sen. Amy Klobuchar who is finally climbing into the Biden vacuum of comparative moderation, and the supreme moneybags of American political history, Michael Bloomberg.

But does Bloomberg have any appeal to the voters? We will have to wait another four weeks until Super Tuesday on March 3, when 15 states—including California and Texas—vote, to find out. No one could dispute his competence, and his political opinions are generally reasonable, but a great deal of his message appears to be the same old Trumpophobia that is all that has fueled the Democrats for the past three years, and what attracted Bloomberg to the Democrats four years ago.

The Democratic conundrum is that, unlike Bill Clinton and Barack Obama, they have no exciting candidate in sight, and the incumbent has a record that is almost impossible to attack. The morality play has ended, and when it revives, it will be for the report of U.S. Attorney John Durham and the possible indictment of a number of prominent Obama administration and Clinton campaign officials.

As the histrionics ended at the Capitol late on Feb. 4, it was possible to discern in the faces of some prominent Democrats a hint of the consternation that is almost certain to grip that party as this election year unfolds. Pelosi’s churlishness in her terse introduction, silly gestures, and general agitation in the background, and Tarzan-imitation at the end, are a metaphor for the overwhelming inadequacy of the Democrats.

On the issues, Trump has the high ground, and anyone who saw him harangue the Congress for 87 minutes—even someone who found him and his message nauseating—could attest that he is a human tornado. The complacent supposition that he would be easy to defeat has vanished with the charges against him.