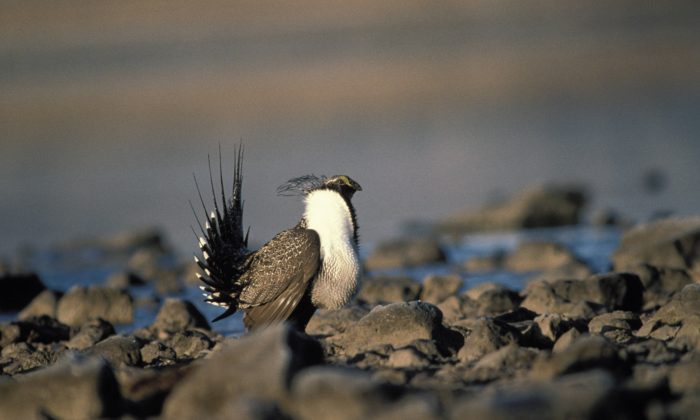 State of the Birds

Since 2009 federal agencies, academics, and conservation groups have assessed the status of America’s birds in an annual “State of the Birds” report, which focuses on the habitats that species need to survive. The 2014 report finds that, while some overall improvement has occurred to wetlands, arid-land habitats—which include the deserts, sagebrush, and chaparral of the American West—continue to be degraded.

Birds in these fragile arid-land habitats show the steepest population declines in the nation with a 46 percent loss in the population of these birds since 1968 and a 6 percent drop just since 2009. Habitat loss and fragmentation, energy development, water diversions, overgrazing, and conversion to agriculture are the largest threats.

One result of this ongoing habitat loss and decline is the loss of species to the dire point that many wide-ranging western arid-lands birds now need protection under the Endangered Species Act.

Greater sage-grouse were once a superabundant bird of the sagebrush sea with millions of birds covering hundreds of million acres from eastern Washington across to the Dakotas, down to Colorado, and back again to cover most of Utah and Nevada. Today, instead of 16 million grouse, there are only about 200,000, and that number is on a downward trend.

Sage grouse are skittish birds that don’t like nearby development, which makes them an excellent indicator of the overall health of the sagebrush ecosystem. Decades of oil and gas drilling, grazing, and the resulting spread of invasive cheat grass, mining, and conversion to agriculture have reduced the amount of sagebrush, fragmented the landscape, and nearly eliminated the large blocks of pristine sagebrush the birds thrive in. The U.S. Fish and Wildlife Service has concluded the species deserves protection under the Endangered Species Act and the agency must make a final decision on listing next year.

Another threatened bird species, the western yellow-billed cuckoo, is also in sharp decline. It inhabits riparian forests along desert streams, a habitat that has been nearly eliminated in the West due to decisions by federal agencies to divert water, and graze large numbers of cattle that eat tree saplings struggling to re-establish themselves next to the streams.

The western yellow-billed cuckoo was just granted ESA protection and a draft plan to protect some of the birds’ remaining critical habitat is now open for public comment.

The cuckoo needs considerably more habitat than currently exists, which will require the restoration and regrowth of streamside forests in the Southwest, southern California, and the Intermountain West. This restoration will benefit numerous other fish and wildlife species, and create new recreation hotspots along the riverside.

Similarly, plans being drafted to conserve greater sage-grouse are falling woefully short of what government scientists said is needed to halt the species decline and maintain quality sagebrush habitat.

Reversing the decline of America’s arid-lands, and the bird species that rely on that desert and sagebrush habitat, will take more than half-measures. The Obama administration needs to take another look at ongoing federal actions and revise them in a fashion that will maintain the wide-open spaces of the West, create jobs through restoring lost forests, and leave future generations of Americans a legacy of abundant wildlife.

Steve Holmer is Senior Policy Adviser for American Bird Conservancy. The 2014 “State of the Birds” report can be found at stateofthebirds.org.