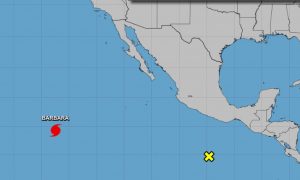 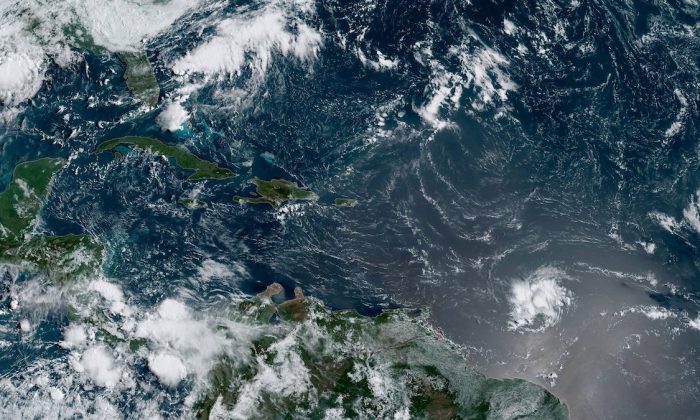 Hurricane Dorian is expected to strengthen into a major hurricane, say forecasters. (National Oceanic and Atmospheric Administration)
US News

Florida Gov. Ron DeSantis declared a state of emergency ahead of Hurricane Dorian, calling on residents to prepare seven days of food, water, medicine, and other supplies.

The U.S. National Hurricane Center (NHC) in Miami “is forecasting that #Dorian could be a major Hurricane. We’ve been monitoring this storm with @FLSERT and will continue to watch closely. All Floridians on the East Coast should have 7 days of supplies, prepare their homes & follow the track closely,” DeSantis said.

According to the agency in an update at 5 a.m., Dorian is tracking to the northwest at 13 mph. It has 85 mph winds and is located about 150 miles north-northwest of San Juan, Puerto Rico, and about 425 miles east-southeast of the southeastern Bahamas.

.@NHC_Atlantic is forecasting that #Dorian could be a major Hurricane. We’ve been monitoring this storm with @FLSERT and will continue to watch closely. All Floridians on the East Coast should have 7 days of supplies, prepare their homes & follow the track closely.

There are currently no coastal watches or warnings in effect, but forecasters are saying the storm could hit Florida over the weekend or Labor Day.

As it passes over the Atlantic, Dorian is expected to strengthen to at least a major Category 3 hurricane with winds in excess of 100 mph.

“A west-northwestward motion is forecast to begin Friday night and continue into the weekend. On this track, Dorian should move over the Atlantic well east of the southeastern and central Bahamas today and on Friday, and approach the northwestern Bahamas on Saturday,” the agency said.

“The cone here really stretches the forecast potentially as far north as coastal Georgia and as far south as the Florida Keys,” said CNN meteorologist Pedram Javaheri of where the storm could make landfall in Florida.

“It has a lot of time in very warm water [to strengthen],” said another CNN meteorologist, Chad Myers. “Not much shear, not much dry air and a lot of time to gain strength.”

In a morning Facebook post, Orlando-based WESH meteorologist Eric Burriss wrote that “I think by the look of the cone, it’s a day we need to start thinking prep.”

I’m concerned that Hurricane #Dorian could move west even more slowly than forecast.

The entire FL peninsula from Miami to Jax should still be prepared for an erratic track … and very intense Cat 3+ pic.twitter.com/VcwmXSuIxQ

“It’s moved through the Caribbean Islands in perhaps the ODDEST most perfect way possible, meaning it ‘threaded the needle.’ THAT is the reason we’re looking at a stronger storm — because it never weakened like we were assuming,” he explained.

“If a Category 3 makes direct landfall in Brevard or Volusia Counties, it would be the strongest direct landfall in a long long time,” Burriss added. “The exact angle of impact would play big into storm surge issues, but for now, we just need to be continuing to get our hurricane kits ready. Food, water, medicine for a few days,” he also wrote.

Puerto Rico is in great shape with Hurricane Dorian taking a largely different route than anticipated. Thank you to FEMA, first responders, and all, for working so hard & being so well prepared. A great result! The bad news, Florida get ready! Storm is building and will be BIG!

A day before, he asked locals to think about where they should stay.

“Are you in an evacuation zone? The saying always goes ‘run from wind, hide from water,’” he said on Wednesday night. “If you’re inland, unless you’re in a mobile home or tiny home, odds are you won’t need to go anywhere.”