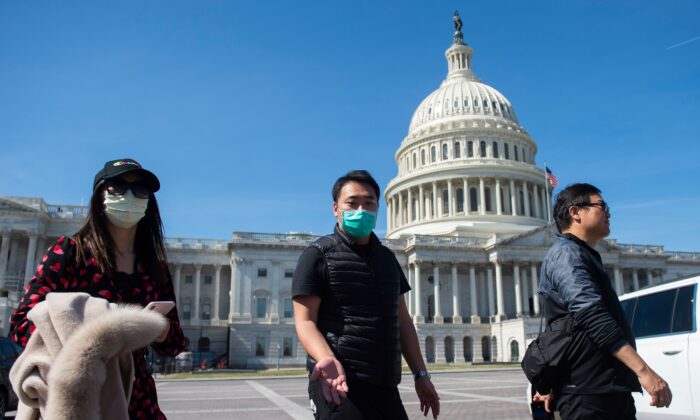 A tour operator, wearing a protective mask, gestures as he leads a tour near the US Capitol in Washington on March 9, 2020. (Andrew Caballero-Reynolds/AFP via Getty Images)
AMERICA

State of Emergency Declared in Washington Over Coronavirus

The U.S. capital is declaring a state of emergency to combat the spread of the new coronavirus.

Washington Mayor Muriel Bowser said the declaration will give her “more authority to implement and fund the measures that we need to monitor and respond to COVID-19 in our community.”

Specifically, it will allow the mayor’s office to mobilize people and resources to better prevent the spread of the virus, which causes the COVID-19 disease. Mandatory curfews or quarantines could be implemented after the declaration, she said.

It came after health officials announced six new cases of coronavirus in the city.

“Those additional cases indicate to us, because of the nature of the new individuals who have been identified, that we have person-to-person transmission occurring in the District of Columbia,” said LaQuandra Nesbitt, director of DC Health, according to WAMU.

In recent days, neighboring Maryland declared a state of emergency several days after following an increase in COVID-19 cases. Virginia Gov. Ralph Northam hasn’t yet declared an emergency but told reporters Wednesday he is prepared to do so.

“This is a rapidly evolving situation,” Nesbitt said, adding that if there is more community transmission, officials might implement other measures, according to WTOP.

The district’s St. Patrick’s Day Parade, scheduled for Sunday, was also suspended. Other events and gatherings were also suspended across the city.

Earlier this week, Rev. Timothy Cole, the rector of the Christ Church in Washington, was diagnosed with the virus. He is believed to have attended events with as many as 500 people.

More than a dozen states have declared emergencies to combat the virus in March.