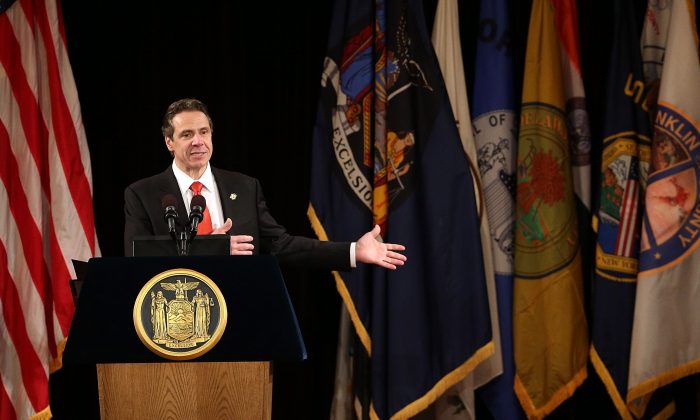 NEW YORK—Negotiations in the next two weeks could decide whether the Metropolitan Transportation Authority receives $40 million in state funding for operating expenses, or the money goes toward paying down the authority’s debt.

Gov. Andrew Cuomo has written out $40 million from the state budget slated for the MTA’s operating expenses and put it toward paying off capital bonds. State Comptroller Thomas DiNapoli has said Cuomo is diverting money away from the MTA, but Cuomo insists the money is still going toward MTA-related uses.

In 2002 the state signed a contract taking responsibility for MTA capital bonds, so the move has the Senate, Assembly, and transit advocates in strong opposition.

A one-time cut of $40 million is not a huge issue for the MTA’s multibillion budget, but the governor has also put forward a financial plan that would remove $20 million a year in the same fashion, Nadine Lemmon of the Tri-State Transportation Campaign said. It would add up to $350 million by 2031, when the bonds are fully paid off.

The MTA was hit hard financially in 2010 and it approved massive service cuts. About 110 bus routes were eliminated along with the W and V subway lines, and service has not yet been restored despite overall ridership reaching record levels. The MTA is also amid negotiatinsg with union workers in hopes of avoiding a Long Island Railroad strike.
DiNapoli has said the diverted funds could have gone to the MTA to restore or expand service.

Over the past few weeks, state officials and advocates alike have called on Cuomo to restore the funds.

Transit advocates see this as a strong sign of support. Last year Cuomo similarly took $20 million from MTA’s operations. The Senate restored the money in its budget, but the item was left in the Assembly’s resolution, and eventually the final budget.

“We’re in a much stronger position this time,” Lemmon said. “But there’s still a risk this won’t happen. … Anything is possible; negotiations happen in the next two weeks.”

Last year the Senate and Assembly had also voted to pass a bill to create a “locked box” that would require legislative action to move transportation funds elsewhere in the budget. At almost the last minute, Cuomo vetoed it.