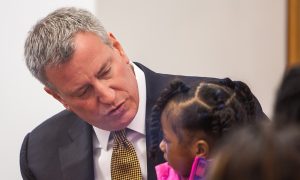 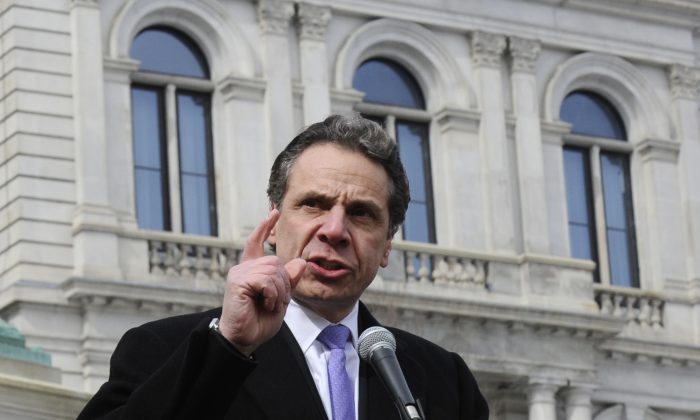 New York Gov. Andrew Cuomo speaks at a rally in support of charter schools on the steps of the state Capitol in Albany, March 4. (Tim Roske/AP)
New York

NEW YORK—When the New York state budget for 2015 was released Saturday night, it became clear who holds the reins in Albany. Gov. Andrew Cuomo got his way on almost every contested issue and education was not an exception.

Mayor Bill de Blasio secured support from both the state Senate and the Assembly for his signature plan for universal prekindergarten and after-school expansion, yet both initiatives were downsized.

On the other hand, the governor made good on his promise to help charter schools, getting them more money and free space in the city, preventing the mayor from delivering on his promise to charge affluent charters rent for public school space.

“Cuomo seems to have gotten his way on every bit of it,” said David Bloomfield, professor of educational leadership, law, and policy at the CUNY Grad Center and Brooklyn College.

Still, de Blasio took a positive note on the budget. “We applaud what Governor Cuomo and our state Legislature have accomplished for the people of this city,” he said in a press release.

The legislators did succeed on some bits and pieces, addressing student data privacy concerns and helping the city to build more classroom space.

The city will get up to $300 million a year for universal pre-K. That is $40 million less than what de Blasio wanted. As both the Senate and the Assembly proposed $340 million, it can be assumed the governor made the cut.

The city’s after-school expansion will get no direct funding. The mayor wanted $190 million.

Another surprise is in the delivery. Payments for the pre-K would be made retroactively, based on how many children would have been served each year. That may be a problem for smaller providers unable to fund the first year on their own.

Also, for the first time, charter schools can provide pre-K too and apply for state money.

Only full-day programs, at least five hours a day, would be eligible. Shorter programs can apply for expansion to full-day services.

The city would solicit program proposals and then apply for all the pre-K programs run both by schools and other entities, such as community organizations, libraries, museums, and charter schools. Non-school entities can also apply individually.

Both the pre-K and the after-school state aid is set to be in place for five years.

The pre-K part of the budget is heavy on quality requirements. Programs will be judged on their curriculum, materials, family engagement, quality of staff and facilities, health, nutrition, and partnerships.

The bill also includes stricter requirements for teachers hired by non-school entities. To get the state money, they would have to have at least a bachelor’s degree in early childhood education and a study plan to get the state certification for pre-K in three years. Before the state’s plan, such teachers needed to have the plan to be certified within five years and had somewhat lower degree requirements.

Pre-K teachers hired by schools still need the state certificate. To obtain it, one has to have the related bachelor’s or master’s degree and then complete a series of additional exams.

The state would have to develop an inspection protocol and every pre-K program would need to be visited at least twice a year by an oversight agency. If any gross violations are found and not immediately corrected, the program would lose the state money.

Money and Space for Charters

Charter schools would get an additional $250 per pupil next school year, $100 on top of that the year after, and an additional $150 in 2016, paid for with state money.

Charters would be able to appeal the space offered and, if successful, get reimbursed for a private space they get on their own.

Under the budget bill, city charter schools would be subjected to financial audits by the city comptroller. For schools outside New York City, the state comptroller would conduct the audits. Charter schools are not currently subject to government audit.

In addition, charter schools continue to be required to complete an independent audit once a year.

The governor was able to secure his Smart Schools Bond Act, increasing the state debt by $2 billion to give schools interactive whiteboards, computers, and install broadband Internet. Yet the purpose of the act broadened to include construction and renovation of pre-K facilities and creation of classroom spaces to replace the “transportable classroom units,” that is trailers serving as classrooms for about 8,000 children in the New York City. The money also can be used to boost school security systems. The city would get some $800 million from the act.

Correction: The article has been corrected to reflect that the state budget does not allocate specific funding for after-school programs in the fiscal year 2014/2015.