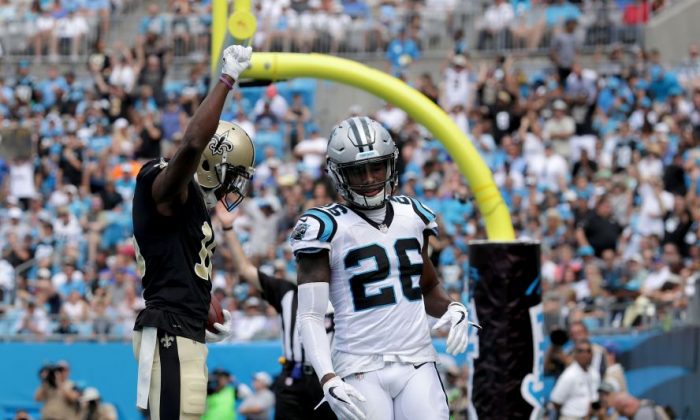 Brandon Coleman No. 16 of the New Orleans Saints reacts after scoring a touchdown as Daryl Worley No. 26 of the Carolina Panthers watches during their game at Bank of America Stadium on Sept. 24, 2017, in Charlotte, N.C. (Streeter Lecka/Getty Images)
Entertainment News

Louisiana Republican state representative Kenny Havard, is calling for the state government to pull state funding, tax breaks, and other support from the New Orleans Saints after players protested during the national anthem.

“Disrespecting our national anthem and flag in the name of social injustice is the highest form of hypocrisy,” Havard said in a written statement Monday,Sept. 25, NOLA.com reported.

Adrian Peterson and other Saints teammates sit in protest during the national anthem. pic.twitter.com/FShDkA2iVK

State Rep. Valarie Hodges, a Republican, requested that the Saints state benefits be reviewed by the Legislature’s Senate and House budget committees due to the protest.

Of the Saints $1.5 billion value, about $165 million can be attributed to public funding, incentives, and tax breaks, according to a 2016 report from NOLA.

“I believe in the right to protest, but not at a taxpayer-subsidized sporting event. Do it on your own time. There are plenty of disabled children, elderly and veterans in this state that would appreciate the money,” Havard said.

“I can’t stress enough that I support their First Amendment and ability to protest,” Havard added. “But there are a lot of people out there that feel the same way as me. I’m getting a lot of calls in support” of pulling the Saints public funding over the protests.

Approximately 10 Saints players were among 200 NFL players who didn’t stand or engaged in some other form of protest during the anthem.

Former San Francisco 49ers quarterback Colin Kaepernick triggered the protests in 2016, starting in the preseason. Kaepernick and other players have claimed they’re protesting police brutality in the wake of prominent officer-involved shootings around the United States and perceived racial injustice.

President Donald Trump reignited the NFL anthem debate by saying that any player who refuses to stand during the anthem should be fired. The president also tweeted Tuesday: “The NFL has all sorts of rules and regulations. The only way out for them is to set a rule that you can’t kneel during our National Anthem!”

Sports fans should never condone players that do not stand proud for their National Anthem or their Country. NFL should change policy!

The president also said the NFL game ratings will drop.

“Ratings for NFL football are way down except before game starts, when people tune in to see whether or not our country will be disrespected!” he wrote.