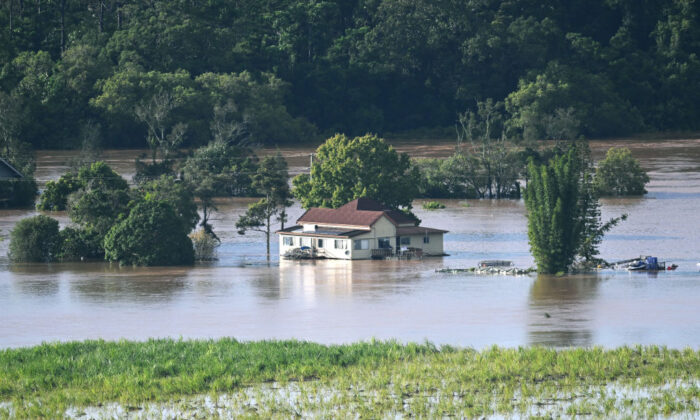 A farmhouse is surrounded by floodwater in Tumbulgum, on the NSW North Coast, Australia, on March 1, 2022. (Photo by Dan Peled/Getty Images)
Australia

A State Emergency Operations Centre (SEOC) has been reactivated in the Sydney suburb of Homebush in response to the ongoing flood emergency in New South Wales (NSW).

The AEOC acts as a central hub where officers from all NSW Government response agencies can gather under one roof to ensure a coordinated response to the flooding and extreme weather affecting much of the state.

This comes as the Northern Rivers region of NSW is experiencing the worst flooding in recorded history, after a slow-moving coastal trough extending from southern Queensland into northern NSW has brought heavy and torrential rain, overtopping the levees of multiple rivers, inundating towns, and leaving thousands of people evacuated.

Evacuation orders are in place across the region, although for some areas, leaving is now considered too dangerous, so State Emergency Services (SES) have advised people to move to higher ground.

In addition, SES has issued a Severe Weather Warning for Sydney, Illawarra, the South Coast, and parts of the Hunter, Central Tablelands, and Southern Tablelands as an East Coast Low off the coast of NSW is expected to bring damaging winds and heavy rainfall from Tuesday night.

Experts from relevant agencies, including the State Emergency Service, Police, Fire and Rescue, Resilience NSW, Health, Planning, Rural Fire Service, and Service NSW will work alongside each other, using state-of-the-art technology to monitor the situation in real-time and coordinate a whole of government response with on-the-ground responders to
enact effective flood relief measures.

NSW Premier Dominic Perrottet said that activating the SEOC enables the coming together of all government agencies to share information and ensure a coordinated, cohesive, and effective response.

“It’s heartbreaking to see communities hit by such severe flooding for the second time in 12 months, but I want to reassure everyone that our emergency response and recovery planning are both well underway,” he said.

“With all the expertise, experience, and knowledge under one roof, we are making sure we do absolutely everything we can to save lives, protect property and make the recovery process as swift as possible.”

Minister for Emergency Services and Resilience, Steph Cooke, said that with the danger far from over, people need to heed the SES advice, as saving lives is the key priority over the next few days.

“But recovery is not a process that starts when the emergency is over – recovery planning is already underway to ensure we can get people and towns back to normal as quickly as possible when the water starts to recede,” she said.

Flood damage assessment will commence as soon as the water recedes and SES give the all clear, after which Disaster Declarations will be made, including assistance measures for individuals and families, businesses, primary producers, non-profit organisations and local governments.