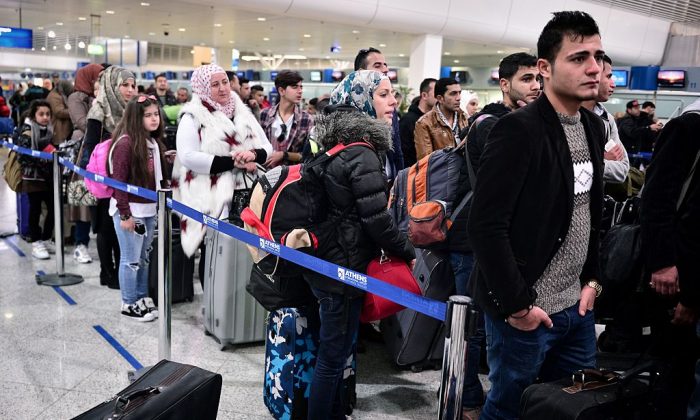 Up to 60,000 foreigners from seven majority-Muslim countries had their visas canceled after the White House executive order blocked them from traveling to the U.S., the State Department said Friday.

That figure contradicts a Justice Department lawyer’s statement Friday during a court hearing in Virginia about the ban. The lawyer in that case said that about 100,000 visas had been revoked.

The State Department clarified that the higher figure includes diplomatic and other visas that were actually exempted from the travel ban, as well as expired visas.

The hearing was focused on Virginia’s efforts to join a legal challenge from legal permanent residents. Erez Reuveni, a lawyer with the Justice Department’s Office of Immigration Litigation, urged U.S. District Judge Leonie Brinkema to keep the lawsuit focused only on lawful permanent residents, who were the subject of the initial lawsuit. Virginia sought to intervene in the case and expand it to include other people traveling to the U.S. on visas.

Brinkema asked Reuveni how many people were affected by the executive order. He said the number of cases involving lawful permanent residents is very small. But including all visas covered by the order, he said, “over 100,000 visas have been revoked.” He did not provide details.

Will Cocks, a spokesman for the State Department’s Bureau of Consular Affairs, clarified the figure after the court hearing.

“Fewer than 60,000 individuals’ visas were provisionally revoked to comply with the executive order,” Cocks said. “We recognize that those individuals are temporarily inconvenienced while we conduct our review under the executive order. To put that number in context, we issued over 11 million immigrant and nonimmigrant visas in fiscal year 2015. As always, national security is our top priority when issuing visas.”

Simon Sandoval-Moshenberg, one of the plaintiffs’ lawyers, said after the hearing that “there is no legal justification to cancel all these visas.”

Brinkema decided to let Virginia join the case, transforming a lawsuit that had been focused on a narrow sliver of those affected into a battle that could affect the rights of tens of thousands of would-be immigrants and visitors.