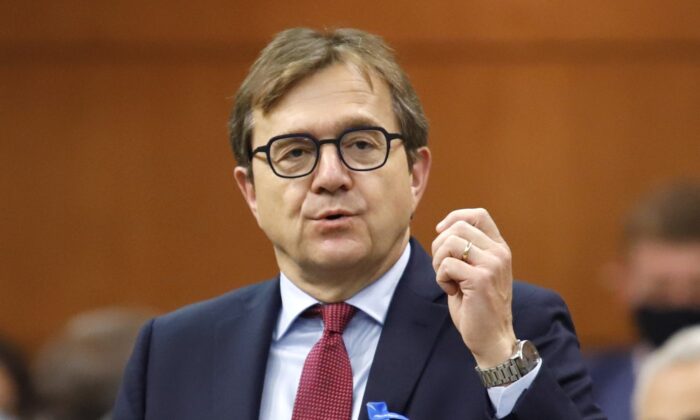 Natural Resources Minister Jonathan Wilkinson rises during Question Period in the House of Commons on Parliament Hill in Ottawa on June 20, 2022. (The Canadian Press/Patrick Doyle)
Canada

The federal government has found a powerful supporter for its decision to allow a natural gas pipeline between Russia and Europe to resume operations.

The U.S. State Department says it backs Canada’s decision to send repaired turbine equipment vital to the Nord Stream 1 pipeline back to Germany.

Spokesman Ned Price says it’s the right decision because it will allow Europe to fortify its gas reserves in the short term.

Price says that will, in turn, help Germany and others increase their energy security in the name of ultimately countering Russia’s energy dominance in the region.

Ottawa’s decision has been roundly criticized by Ukraine, which calls it a “dangerous” exception to Canada’s sanctions against Russia.

“In the short term, the turbine will allow Germany and other European countries to replenish their gas reserves, increasing their energy security and resiliency and countering Russia’s efforts to weaponize energy,” Price said in a statement.

“We are grateful for the partnership with Canada and Germany and their solidarity in defence of Ukraine in the wake of Russia’s unprovoked and unjustifiable war against its sovereign neighbour and the significant sanctions they have each put in place to hold the Kremlin accountable.”

Wilkinson announced Saturday that the turbines, which had been sent to Montreal for scheduled repairs by Siemens Canada, would be returned.

Back in June, Siemens said Canada’s sanctions against Russia over its invasion of Ukraine meant the company couldn’t return the turbines.

“This dangerous precedent violates international solidarity, goes against the principle of the rule of law and will have only one consequence: it will strengthen Moscow’s sense of impunity.”

Germany had feared Russia would shut off deliveries of natural gas to Europe after the planned maintenance, having already slowed the flow of energy—something Gazprom, Russia’s state-owned energy giant, attributed to the needed repairs.

Ukraine isn’t buying it, describing Russia’s threats as little more than “blackmail that has no technical justification.”

“Russia is able to continue to supply gas to Germany in full without this turbine,” it said.

Germany, which is Europe’s largest economy, warned last month it was in a crisis over Russia’s decision to cut the amount of gas flowing through the Nord Stream 1 pipeline by 60 percent.