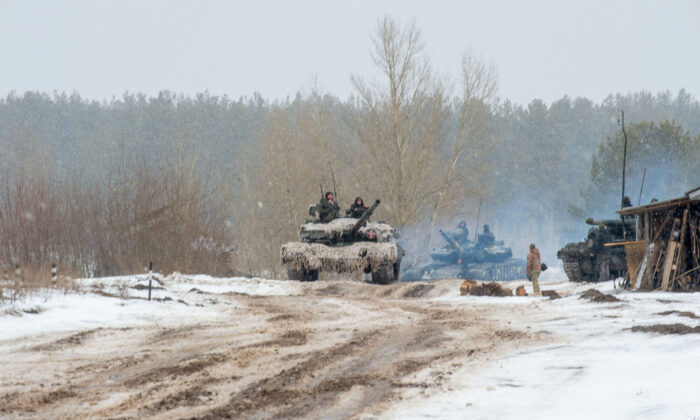 Ukrainian Military Forces servicemen of the 92nd mechanized brigade use tanks, self-propelled guns, and other armored vehicles to conduct live-fire exercises near the town of Chuguev, in the Kharkiv region, on Feb. 10, 2022. (Sergey Bobok/AFP via Getty Images)
Europe

“Those in Ukraine should depart immediately via commercial or private means,” the U.S. State Department said in a travel advisory on Saturday.

The agency also reminded those who chose to stay in Ukraine to exercise increased caution due to crime, civil unrest, and potential combat operations caused by potential military action from Russia.

“There are continued reports of a Russian military build-up on the border with Ukraine, indicating potential for significant military action against Ukraine. The security conditions, particularly along Ukraine’s borders, in Russia-occupied Crimea, and in Russia-controlled eastern Ukraine, are unpredictable and can deteriorate with little notice. Demonstrations, which have turned violent at times, regularly occur throughout Ukraine, including in Kyiv,” read the advisory.

The Biden administration ordered an evacuation of most U.S. direct-hire employees from the U.S. Embassy in Kyiv earlier in the day.

Consular services at Embassy Kyiv will be suspended on Sunday.

Americans who need emergency assistance in Ukraine should fill out an online form to request help from the State Department.

Several other countries including the United Kingdom, Germany, Japan, and Israel have encouraged their citizens to leave Ukraine due to escalating tension on the Russia-Ukraine border.

Meanwhile, during a call between Secretary of State Antony Blinken and Russian Foreign Minister Sergey Lavrov on Saturday, the United States urged Russia to resolve the crisis at the border through a diplomatic path and vowed to take resolute, massive action along with other transatlantic partners.

Russia has amassed tens of thousands of troops and artillery along its border with Ukraine over the past few months.

The White House reiterated that a Russian invasion of Ukraine is imminent.

“If you look at the disposition of forces, both in Belarus and in Russia on the other side of the Ukrainian border from the north and from the east, the Russians are in a position to be able to mount a major military action into Ukraine any day now,” national security adviser Jake Sullivan Sullivan said Friday.

A top Kremlin spokesperson said on Friday that President Joe Biden is scheduled to speak with Russian President Vladimir Putin on Saturday.

“Indeed, the U.S. side requested a conversation with President Putin, and the talks of the two presidents are planned to take place tomorrow in the evening,” Putin spokesman Dmitry Peskov said.

Nick Ciolino and Jack Phillips contributed to this report.