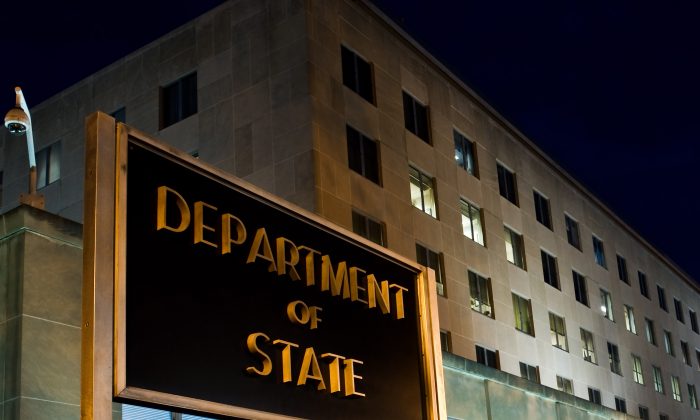 The State Department says it’s looking into an employee who boasted on hidden camera that he routinely conducts political work for a socialist organization during his work hours.

Aside from collecting taxpayer money for activities unrelated to his job, Stuart Karaffa appears to have violated the Hatch Act, which prohibits federal employees from engaging in political activities while on duty.

“I can confirm Stuart Karaffa is a management and program analyst with the Bureau of Overseas Buildings Operations,” a State Department spokesperson told The Epoch Times via email. “We take seriously any allegation of a violation of the Hatch Act and financial disclosure rules and are closely reviewing this matter.”

The spokesperson declined to comment further, saying the situation is a “personnel matter.”

Violations of the Hatch Act may lead to removal, reduction in grade, debarment from federal employment for up to five years, suspension, reprimand, or a fine of up to $1,000.

Karaffa told undercover reporters from Project Veritas that the Trump administration cut the data-analytics program that he used to work on. “Now, I’m just straight like 8:30 to 5. So, it gives me so much more time, and emotional bandwidth to do all of this stuff,” he said, referring to his work for the Metro DC chapter of the Democratic Socialists of America (DSA).

“So it’s like, [expletive] that, I’m gonna do DSA work at work?” the reporter asked.

Karaffa’s comments also suggest that he’s tried to sabotage the agenda of President Donald Trump, or has supported sabotaging it.

“Resist everything,” he said.

“Everything?” the reporter replied.

Karaffa said he’s been careful to keep his political activities at work secret from others at the department. He said he’s used tactics such as not leaving a “paper trail,” and not sending emails until after work hours.

Karaffa seemed cavalier about his activities, referring to the extensive job protections afforded to federal workers.

“I have nothing to lose. It’s impossible to fire federal employees, I don’t know,” he said.

He acknowledged, though, the history of his internet activity would likely expose him.

“I mean, I could make the case before like a court of law that … I’m going to the Virginia sort of, campaign-finance website. That I’m just interested in what people are doing politically,” he said. “But if they also go and look at, like, DSA minutes and, like, officer positions they’ll be, like, ‘That’s weird, you were the co-chair of the electoral caucus. And you spent three hours on a Virginia campaign-finance website.’”

Because of his involvement in government contracts, Karaffa must disclose his official affiliations to prevent conflicts of interest. But he says the process is far from rigorous.

“I put all of my officer positions on it, and somebody just rubber stamps it, and it goes forward,” he said. “Now I can go back and be like, ‘you know, the ethics officer, he was aware of what I was doing, so…’”

Project Veritas says Karaffa is only the first person to be exposed in a yearlong investigation into the so-called “deep state.”

“We’ve heard a lot about the Deep State: holdovers from the previous administration resisting change or nameless and faceless bureaucrats slowing things down or leaking secrets in an effort to undermine this administration,” Project Veritas President James O’Keefe said in a release. “What is truly striking is their boldness, they are not afraid. They are even boastful about a warped reality, where they won’t get caught and can’t get fired even if they did.”

Karaffa comes from the Chicago area, his website says. While working on a degree in international studies at the University of Illinois, he enrolled in the Defense Department’s Boren Scholar program, which paid for his studies of Mandarin in Beijing in 2007 and 2008 in exchange for a commitment to work at least a year for the federal government. After graduating, he moved to Washington and spent at least five years at the Defense Department’s National Security Education Program.

Federal agencies involved in national security are allowed to give jobs to Boren Scholars, without the need for the usual competitive hiring process.

Around 2016, Karaffa obtained a master’s degree in public administration from George Washington University. It’s not clear when he joined the State Department.

Shortly after Project Veritas announced its series exposing the un-elected Washington establishment, Metro DC DSA urged its members who work for the federal government to “lock down all social-media accounts and activate two-factor authorization on all important accounts,” Project Veritas reported.