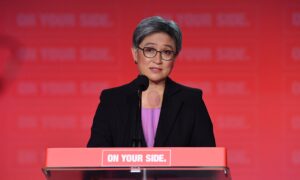 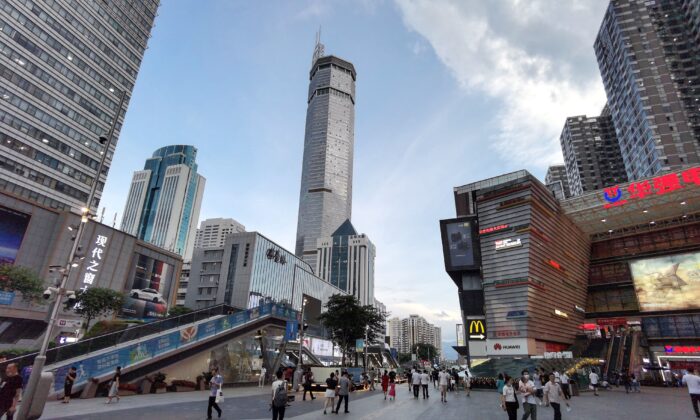 The 300-metre high SEG Plaza (C) is seen after it began to shake, in Shenzhen in China's southern Guangdong province on May 18, 2021. (STR/AFP via Getty Images)
China Society

The U.S. Department of State this week issued a warning for employees and all Americans in Shenzhen, China, to stay away from the SEG Plaza tower following video footage and reports that the nearly 1,000-foot-tall skyscraper was swaying.

The U.S. consulate in nearby Guangzhou said Wednesday that the alert near the SEG Plaza tower will remain “until further notice” due to reports of the building shaking as well as the “evacuation of people from the building and in the immediate vicinity.”

“U.S. Consulate General in Guangzhou employees have been instructed to avoid the SEG Tower/Huaqiangbei area until further notice,” according to the alert. “The U.S. Consulate General in Guangzhou recommends that all U.S. citizens avoid the SEG Tower and Huaqiangbei area until further notice.”

The building, which is 984 feet tall and is among the tallest buildings in Shenzhen, houses a large electronics market and numerous offices.

Video footage posted online shows the building swaying back and forth, as people are seen running away and screaming. The building was evacuated after the shaking started, reported local news outlets.

Panic in Shenzhen’s Huaqiangbei electronics market as the SEG Building starts shaking, for reasons as yet unknown. Fire and police crews have closed off some of the area. Not my video, circulating on Wechat. pic.twitter.com/rGMV92Sm8p

There were no reported earthquakes and no severe weather at the time of the shaking.

Local Chinese Communist Party (CCP) affiliated officials investigating the cause said that no “abnormalities in the main structure and surrounding environment of the building” were found, according to CNN.

Authorities have not yet disclosed why the skyscraper was wobbling, although the Shenzhen emergency management agency also said it is investigating the matter.

“Vendors from the ninth floor said they felt it and that the shaking felt like an earthquake,” Hu Jian, a live-streaming equipment vendor who works in the tower, told the South China Morning Post. “We couldn’t feel it from the second floor.”

On Chinese social media sites, a number of people said that the building should be demolished.

“Shenzhen should not use this shaking building again. It’s fit for demolition,” wrote one person, according to reports. “In today’s cities, there’s no guarantee of the quality of these skyscrapers,” said another, referring to how many tall buildings in China are hastily made and with relatively lax safety standards.

The online database Council on Tall Buildings and Urban Habitat says the SEG Tower is the 18th-tallest building in Shenzhen and the 104th-tallest in China.