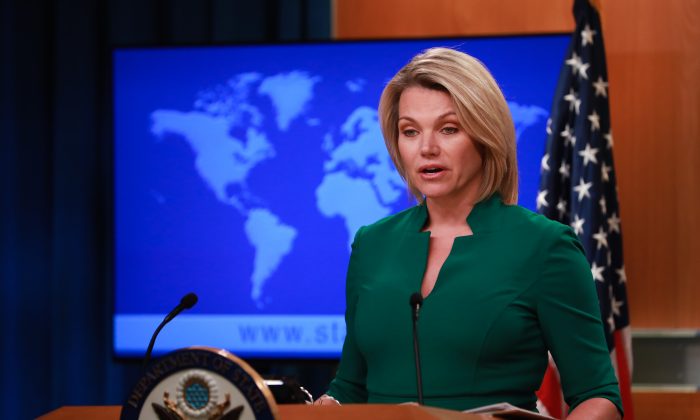 Acting Under Secretary of State for Public Diplomacy and Public Affairs and State Department spokesperson Heather Nauert at a press briefing at the State Department in Washington on July 31, 2018. (Samira Bouaou/The Epoch Times)
Trump Administration

The State Department says it’s “not in the least” discouraged after Iranian officials dismissed President Donald Trump’s remark that he’s willing to meet with the Islamic state without any preconditions.

“They’re certainly entitled to do that,” spokeswoman Heather Nauert said during a July 31 press conference. “We prefer diplomacy, they prefer to export their malignant behavior around the world, as we have seen them do for many, many decades.”

In his typical carrot-and-stick approach, Trump exerts increasing pressure on Iran, while leaving the regime a way out.

In May, he scrapped the Iran nuclear deal (JCPOA) and ordered the reimposition of sanctions on the regime. But on July 30, he said he “would certainly meet with Iran if they wanted to meet.”

The other JCPOA signatories—Russia, China, the United Kingdom, France, Germany, and the European Union—promised Iran they’d keep the deal alive. But they also made it clear they won’t be able to force their companies to keep doing business with Iran, since it could break the sanction rules and, thus, cut the companies off from the U.S. financial system.

Secretary of State Mike Pompeo said one major goal is to stop Iranian oil exports and eliminate the most crucial source of revenue for the Islamic Revolutionary Guard Corps, the military branch that, together with Supreme Leader Ayatollah Ali Khamenei, holds sway over Iran’s elected government and supports various terrorist and militant groups in the region.

The last time sanctions were reimposed, under President Barack Obama in 2012, Iran lost about three-fifths of its oil exports. Back then, all 20 countries that were importing Iranian crude received waivers from the sanctions, in exchange for gradually reducing the imports.

The Trump administration may be more stringent. After initially indicating no waivers at all, officials acknowledged some waivers will be considered.

“We want people to reduce oil purchases to zero, but in certain cases, if people can’t do that overnight, we’ll consider exceptions,” Treasury Secretary Steven Mnuchin told reporters on July 13.

Oil industry sources in India, the second-biggest importer of Iran’s 2.5 million barrels a day, already said in June they’re preparing to switch to other sources, while the leadership of Saudi Arabia, Iran’s rival, offered its 2 million barrels a day in untapped production to patch the hole in the market.

China, Iran’s biggest customer, received sanction waivers from the Obama administration, despite barely trimming its oil imports. But Trump is facing off with China in a tariff battle over trade abuses. The Iran situation gives Trump a chance to threaten China with sanctions, while China has to weigh its relationship with Iran over the one with the United States.