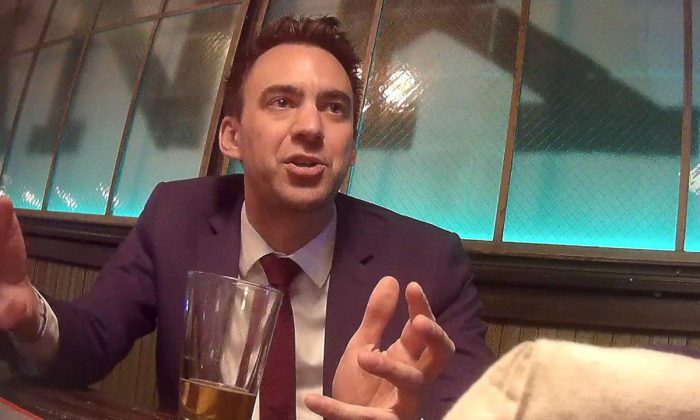 A State Department employee was caught on camera boasting about spending his work hours engaged in political activism for the Metro DC chapter of the Democratic Socialists of America (DSA)—an activity that is likely illegal.

Stuart Karaffa, management and program analyst at the State Department, said he tries to hide his work for the DSA, a self-described socialist organization, from his supervisors. Karaffa is a DSA member.

“I’m careful about it. I don’t leave a paper trail,” he told undercover reporters from Project Veritas.

Karaffa said he worked on a data analytics program that was cut by the Trump administration.

“Now I’m just straight like 8:30 to 5:00. So it gives me so much more time, and emotional bandwidth to do all of this stuff,” he said, referring to his DSA work.

“So it’s like, [expletive] that, I’m gonna do DSA work at work?” the reporter asked.

Apart from working for the DSA on Uncle Sam’s dime, some responses of Karaffa’s suggested he’s tried to sabotage the agenda of President Donald Trump, or supported sabotaging it.

“Resist everything,” he said.

“Everything,” the reporter replied.

Karaffa said he covers up his DSA work by leaving tasks that create a paper trail, like sending emails, until he’s off.

“I leave emails, and like… Any press [expletive] that comes up I leave that until after 5:30,” he said. “But as soon as 5:31 hits, got my like draft messages ready to send out.”

“An employee may not engage in political activity while the employee is on duty,” one statute associated with the law states.

Depending on the severity of the violation, the employee may face removal, reduction in grade, debarment from federal employment for up to five years, suspension, reprimand, and/or a fine of up to $1,000.

Karaffa, however, didn’t appear to be too concerned.

“Maybe someday I’ll go to board of elections jail, probably not,” he said.

A State Department spokesperson issued the following response to The Epoch Times:

“I can confirm Stuart Karaffa is a Management and Program Analyst with the Bureau of Overseas Buildings Operations.

We take seriously any allegation of a violation of the Hatch Act and financial disclosure rules and are closely reviewing this matter.

This is a personnel matter that we cannot comment on further at this time.”

While he said “nobody knows” about his DSA work, the history of his internet activity would likely expose him, he acknowledged.

“I mean I could make the case before like a court of law that… I’m going to the Virginia sort of, campaign finance website. That I’m just interested in what people are doing politically,” he said. “But if they also go and look at, like, DSA minutes and, like, Officer positions they’ll be, like, ‘That’s weird, you were the co-chair of the electoral caucus. And you spent three hours on a Virginia campaign finance website.’”

Still, he appeared confident in his job security. “I have nothing to lose. It’s impossible to fire federal employees, I don’t know,” he said.

As an employee involved in government contracts, Karaffa has to disclose his official affiliations to prevent conflicts of interest. But the process is far from rigorous, as he described.

“I put all of my officer positions on it, and somebody just rubber stamps it and it goes forward,” he said.

“Now I can go back and be like, ‘you know, the ethics officer, he was aware of what I was doing, so…’”

Karaffa comes from “just outside of Chicago, Illinois,” his website states. While completing International Studies at the University of Illinois, he enrolled in the Defense Department’s Boren Scholarship, which paid for his studies of Mandarin in Beijing in 2007 and 2008 in exchange for a commitment to work at least a year for the federal government. After graduating, he moved to Washington and spent at least five years at the Defense Department’s National Security Education Program.

Federal agencies involved in national security are allowed to directly give jobs to Boren Scholars without the need for the usual competitive hiring process (pdf).

Around 2016, Karaffa obtained a master’s degree in Public Administration from George Washington University.

It’s not clear when exactly he joined the State Department. Since about 2017, he’s been the treasurer of the Mount Pleasant Advisory Neighborhood Commission 1D in Washington (pdf).

Karaffa did not respond to a request for comment by The Epoch Times.

Project Veritas promises a lineup of exposés in a similar vein with the one on Karaffa—a result of a yearlong investigation.

“We’ve heard a lot about the Deep State; holdovers from the previous administration resisting change or nameless and faceless bureaucrats slowing things down or leaking secrets in an effort to undermine this administration,” said Project Veritas President James O’Keefe in a release. “What is truly striking is their boldness, they are not afraid. They are even boastful about a warped reality, where they won’t get caught and can’t get fired even if they did.”

It’s necessary to name these employees, O’Keefe said, as they “seek to undermine the fabric of our republic.”

“Finally, we get to see the faces of these shadowy figures and hear what their motivations are,” he said. “And we are not the source, they are the source, in their own words.”

UPDATE: This article has been updated to include a response from a State Department spokesperson.

Correction: The article was corrected to reflect an accurate description of Democratic Socialists of America