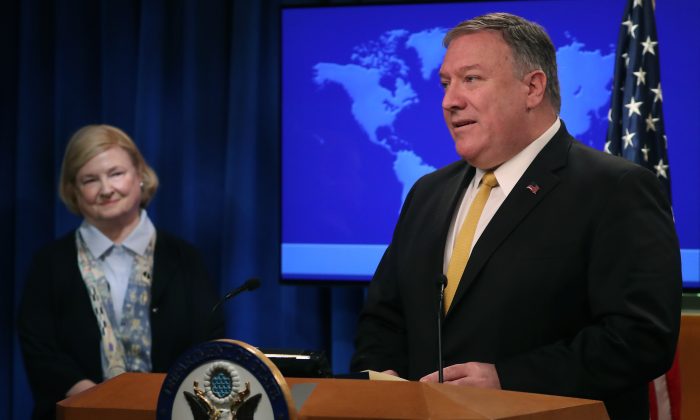 Secretary of State Mike Pompeo is joined by commission chair Harvard Professor Mary Ann Glendon while announcing the formation of a commission to redefine human rights, based on “natural law and natural rights”, during a news conference at the Department of State, on July 8, 2019 in Washington. (Mark Wilson/Getty Images)
Trump Administration

WASHINGTON—U.S. Secretary of State Mike Pompeo announced on July 8 the creation of a commission on unalienable rights to advise him on how to best interpret human rights, based on the Constitution and the 1948 Universal Declaration of Human Rights.

“Every once in a while, we need to step back and reflect seriously on where we are, where we’ve been, and whether we’re headed in the right direction,” he said. “I hope that the commission will revisit the most basic of questions: What does it mean to say or claim that something is, in fact, a human right?”

The Trump administration is committed to a “foreign policy from the founding” principals of the country, he said, and the creation of this bipartisan, interreligious group of human rights experts, philosophers, and activists is directed toward that goal.

This comes as some on the left in the United States, such as presidential candidate Sen. Bernie Sanders (I-Vt.), are calling for an expanding list of what “human rights” encompasses. He’s called for a 21st-century economic Bill of Rights that includes things such as affordable housing, a job that “pays a living wage,” a pre-K-through-college education, and a “secure retirement.”

Pompeo warned that while words like “rights” can be “rays of light in a realm of darkness, … they can also be lethal arrows.”

“As human rights claims have proliferated, some claims have come into tension with one another, provoking questions and clashes about which rights are entitled to gain respect,” he said. “The time is right for an informed review of the role of human rights in American foreign policy.”

He also called out countries and international institutions that “remain confused about their respective responsibilities concerning human rights.”

The latter is possibly a reference to the U.N. Human Rights Council, which the United States withdrew from last year.

“We must, therefore, be vigilant that human rights discourse not be corrupted or hijacked or used for dubious or malignant purposes,” Pompeo said. “It’s a sad commentary on our times that more than 70 years after the Universal Declaration of Human Rights, gross violations continue throughout the world, sometimes even in the name of human rights.”

In the press conference, Pompeo named Harvard Law School professor Mary Ann Glendon as the head of the Commission on Unalienable Rights. He described her as a world-renowned author and expert in the field of human rights.

Glendon, who spoke after Pompeo’s introduction, said she is deeply honored to chair the commission and expressed gratitude to Pompeo for giving priority to human rights.

Bowen Xiao contributed to this report